Donald Trump Could Be Grounded — From Flying In His Private Plane 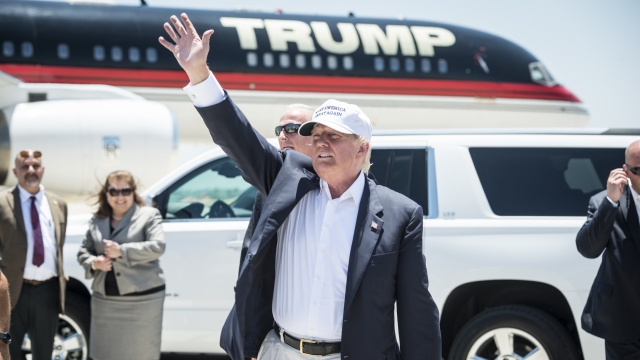 SMS
Donald Trump Could Be Grounded — From Flying In His Private Plane
By Grant Suneson
By Grant Suneson
April 19, 2016
The FAA confirmed one of Donald Trump's private jets that he's used on the campaign trail isn't registered. The registration lapsed in January.
SHOW TRANSCRIPT

We might've stumbled onto the real reason Donald Trump is running for president: He needs a private plane that's actually registered to fly.

The Federal Aviation Administration confirmed to The New York Times that the registration on one of Trump’s planes lapsed in January and has yet to be renewed.

Trump’s plane, a Cessna 750, reportedly made several flights on the campaign trail.

Trump's company, which registered the plane, got a warning in December from the FAA to renew the registration. The plane could be grounded until its registration issue is fixed.

Flying an unregistered plane could even result in a six-figure fine for the plane’s owner and up to three years in jail, though that’s not likely.

Trump spokeswoman Hope Hicks says the plane's registration process is almost done, but the FAA says it hasn't received any paperwork for the Cessna.

Even if the Cessna is grounded, Trump won’t have any trouble getting around. He still has a Boeing 757 and three helicopters.