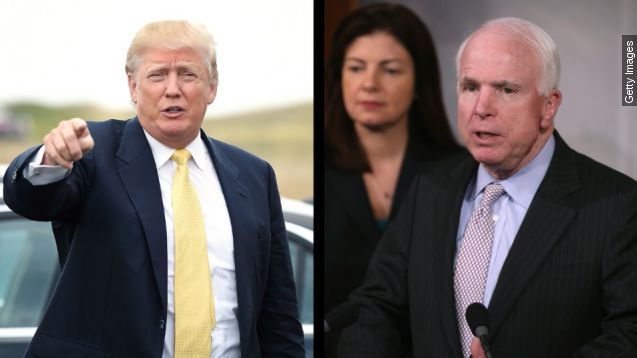 After enraging the GOP field with that criticism of Arizona Sen. John McCain over the weekend, Donald Trump isn't letting up.

"Well, why would you say the first ..." Lauer started to say.

"Why would you say ..." Lauer interjected.

"Hey, Matt. Savannah started it off by saying I said he wasn't a war hero. I didn't say that," Trump responded.

On Monday, Trump submitted an op-ed to USA Today where he spoke less about his comments and more about McCain's dealings with current soldiers and veterans.

"The reality is that John McCain the politician has made America less safe, sent our brave soldiers into wrong-headed foreign adventures, covered up for President Obama with the VA scandal and has spent most of his time in the Senate pushing amnesty. He would rather protect the Iraqi border than Arizona's," Trump said.

"Does Donald Trump owe you an apology," the MSNBC anchor asked.

"No I don't think so, but I think he may owe an apology to the families of those who have sacrificed in conflict," McCain said.

Trump's original attack was a response to McCain's accusation that Trump had "fired up the crazies" with his comments against Mexicans.

Trump responded to that criticism in Monday’s op-ed as well, saying that many of his competitors "had no business running for president" and that he didn't "need to be lectured by any of them."