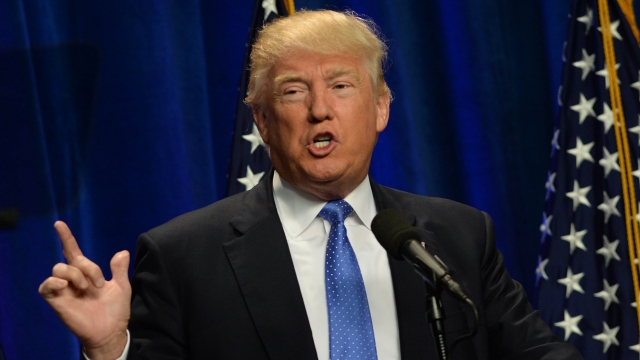 Trump loaned his campaign more than $2.2 million last month, a huge chunk of the $5.6 million he brought in.

When it comes to campaign contributions in May, Donald Trump brought in a lot less cash than Hillary Clinton. That's according to reports filed Monday with the Federal Election Commission.

The Trump campaign received just over $3 million in contributions, while the Clinton camp raked in over $19 million.

The filings show Clinton brought in more than $26 million in total during the period, which includes contributions, transfers, refunds, loans and interest. Trump's campaign saw about $5 and half million. And of that, Trump loaned his camp just over $2 million.

By the end of May, Trump had just shy of $1.3 million of cash on hand, while Clinton had more than $42 million.

Analysts and political reporters are calling Trump's May fundraising totals "disastrously bad" and "crippling" and are saying the Clinton campaign "clobbers" Trump in fundraising. They're also questioning why Trump lags so far behind Clinton since he was able to start focusing on the general election five weeks before Clinton.

The Clinton campaign started running general election ads against Trump more than a week after she won the California primary and effectively secured the Democratic nomination for president. However, Trump's campaign hasn't aired any of those ads. On Saturday, the campaign sent an email to voters, setting an "emergency" fundraising goal of $100,000 to help with advertising.

The FEC filings came on the same day news broke that Trump had fired his campaign manager.