Donald Trump And Paul Ryan Are Coming Together For The GOP 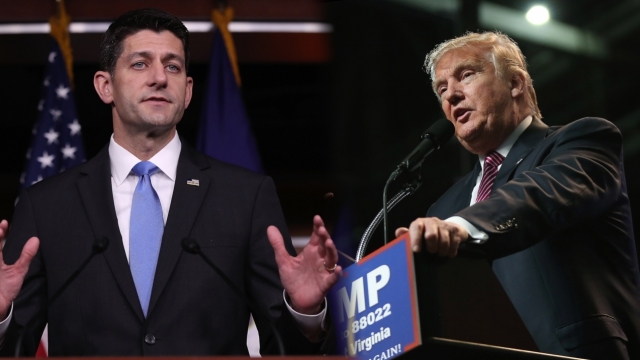 SMS
Donald Trump And Paul Ryan Are Coming Together For The GOP
By Ryan Biek
By Ryan Biek
May 12, 2016
The speaker of the House holds many followers but had previously criticized the Republican front-runner.
SHOW TRANSCRIPT

It's not exactly an endorsement from Paul Ryan, but Donald Trump could be a step closer to shoring up support among Republicans.

A joint statement from the presidential candidate and the speaker of the House, released Thursday by the Trump campaign, said, "While we were honest about our few differences, we recognize that there are also many important areas of common ground."

Earlier in the campaign season, several prominent Republican leaders had pushed Ryan to run for president against Trump, though he firmly rejected the idea.

"I should not be considered. Period. End of story," Ryan said in April.

Ryan has said he'd be neutral in the primary process, since he's chairing the Republican National Convention in July.

But over the past several months, he's criticized Trump's comments and proposals.

Trump is the GOP's presumptive nominee, though. GOP lawmakers are now saying that uniting the party around a candidate who can beat the Democrat's nominee — likely Hillary Clinton — is the top priority.

Ryan told reporters before his meeting with Trump that he didn't expect to change the presidential candidate's policies but wanted his and Trump's supporters to come together.

The billionaire businessman did make one thing clear before the meeting, though: He doesn't need Ryan's support.

"If we make a deal, that will be great. And if we don't, we will trudge forward like I've been doing and winning all the time," Trump told Fox News.