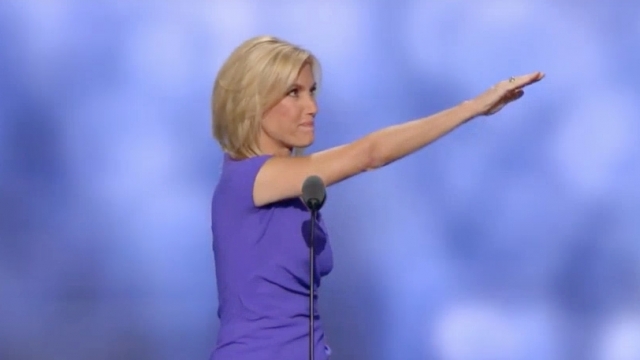 SMS
Donald Trump And His Supporters Can't Shake The Nazi Comparisons
By Grant Suneson
By Grant Suneson
July 21, 2016
Laura Ingraham was criticized for seeming to give a Nazi salute after her RNC speech. This isn't the first time Trump's been compared to Hitler.
SHOW TRANSCRIPT

"God bless you and God bless the United States of America," Ingraham said before making a gesture toward the crowd.

Ingraham posted a picture on Twitter to point out that she's not the only one to be photographed in that position.

But this is far from the first time Donald Trump and his supporters have been criticized for similarities to the Nazi regime of Adolf Hitler.

Comedian Louis C.K. said in a letter to fans: "Please stop it with voting for Trump. It was funny for a little while. But the guy is Hitler."

Trump had to backtrack several times during the campaign after retweeting white supremacist accounts on Twitter.

Trump even tweeted an image of Hillary Clinton in front of money next to a six-pointed star, a symbol of Judaism. Trump's camp said he didn't intend any anti-Semitism, but the image was originally posted on a white supremacist message board.

Trump denied that he intentionally interacted with hate groups, but some of his supporters have had no problems referencing Nazi symbolism.

"Sieg Heil," a Trump supporter said after a protester was dragged out of a rally.