Donald Sterling Vows To Fight NBA And His Wife For Clippers 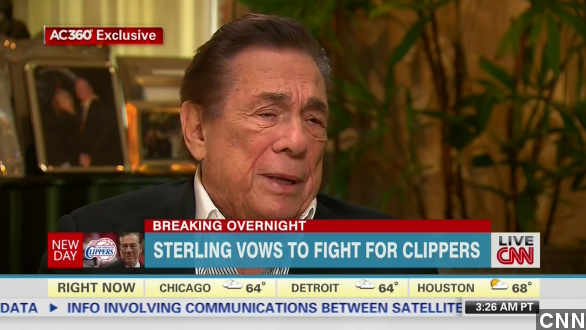 By Briana Koeneman
May 28, 2014
In a fiery response, Donald Sterling vowed to fight the NBA to keep his share of the Clippers, while his wife, Shelly, is working to sell the team.
SHOW TRANSCRIPT

Looks like disgraced Los Angeles Clippers owner Donald Sterling won't be giving up his team so easily after all.

"The banned Clippers owner drawing the line in the sand with the NBA, claiming that he cannot be punished because his racist comments were recorded illegally by V. Stiviano in the heat of a lovers' quarrel." (Via CNN)

Sterling's lawyer told several media outlets, including USA Today and ESPN, that his client is not interested in selling the Clippers. This contradicts a statement made Tuesday by his wife's attorney, who claimed Donald authorized Shelly Sterling to sell the team, including his 50 percent stake.

​Sterling is now anything but willing to give up his share of the Clippers, if the fiery response he sent to the NBA Tuesday is any indication.

USA Today obtained a copy of the 26-page document. In it, Sterling vows to fight the league's decision to force him to sell the team because he says he won't get a fair hearing.

The document rips into the NBA's punishment, calling the penalties against Sterling "draconian" and the league's proceedings a "sham" because nothing he said violated his contractual agreement with the NBA.

"In reality, Mr. Sterling is being banned for life, fined $2.5 million, and stripped of his ownership rights for a purely private conversation with his lover that he did not know was being recorded and that he never intended to see the light of day​." (Via USA Today)

NBA Commissioner Adam Silver has been trying to force a sale of the Clippers ever since someone leaked audio of Sterling making racist comments online last month. (Via KCBS)

For weeks, Sterling kept mostly quiet about the incident — until now.

His attorney told ESPN Tuesday: "He says, 'It's my team, and I'll sell it when and if I get around to it.' He was in a state of shock at first. Now he's recovering and he's much more feisty."

But while Donald Sterling fights to keep his team, several reports say Shelly Sterling is working just as hard to sell it.

Sources told TMZ Shelly will accept offers this week — and one of the interested parties is a group led by former Microsoft CEO Steve Ballmer, who has reportedly made "a very competitive offer."

So who will end up winning the war — Donald Sterling, Shelly Sterling or the NBA?

As a writer for Forbes points out, the NBA will hold a hearing on the matter June 3, as scheduled. "Thereafter, it may be up to the judicial system to decide the ultimate fate of the Los Angeles Clippers and Donald Sterling's retention of any ownership in the team."

But as CNN points out, Shelly Sterling could just sell the team, with the blessing of the NBA, and everyone involved could avoid a potentially messy and long legal battle.

Donald Sterling reportedly bought the Clippers in 1981 for about $12 million. Several reports say now the team could be sold for between $1.5 billion and $2 billion.