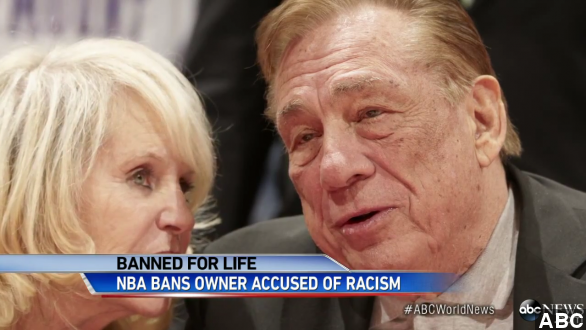 By Briana Koeneman
May 23, 2014
According to several reports, disgraced Los Angeles Clippers owner Donald Sterling has agreed to let his wife, Shelly, negotiate the sale of the team.
SHOW TRANSCRIPT

Donald Sterling has officially handed off his ownership of the Los Angeles Clippers — this according to several reports out Friday morning.

"LA Clippers owner Donald Sterling has agreed to allow his wife, Shelly, to negotiate a forced sale of the team.​" ​(Via ESPN)

Unnamed sources told both ESPN and TMZ Shelly Sterling and her lawyers have been secretly negotiating the sale with the NBA ever since her husband was banned from the league for life on April 29.

According to TMZ, Shelly has been meeting with NBA Commissioner Adam Silver and NBA lawyers to "resolve the dispute amicably."

Sources say the league has yet to officially accept Shelly's proposal. But if she is willing to sell the team in its entirety, it could bring what was expected to be a brutal legal battle to a quick, clean end.

"What this means on its face is that there's going to be an enormous savings to the NBA of time and money and effort." (Via MSNBC)

Donald Sterling was slapped with a lifetime ban from the NBA after an audio tape of him making racist comments to his assistant, V. Stiviano, was made public last month. (Via ABC)

ESPN reported Monday the NBA had charged Sterling with damaging the league with those racist remarks and set a hearing for June 3.

No comment yet from either Donald or Shelly Sterling on this new report.