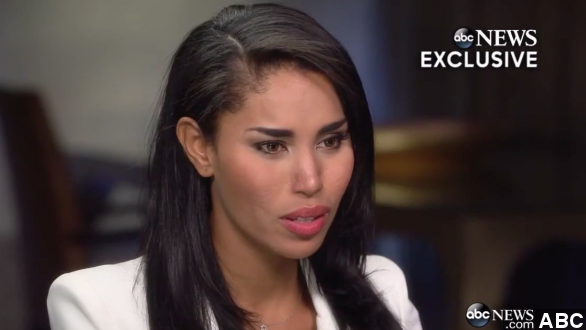 V. Stiviano, the woman who recorded racist remarks from Donald Sterling, has spoken out for the first time since the tape went public just over a week ago.

Stiviano, Sterling's personal assistant and alleged mistress, sat down in an exclusive interview with ABC's Barbara Walters Friday. Despite comments on the tape made by Sterling, Stiviano says he's not racist.

"No, I don't believe it in my heart ... I think Mr. Sterling comes from a different generation."

TMZ first leaked the tape now heard around the world April 25. In that recording, Sterling told Stiviano he did not want her posing for photos with black people or bringing them to games.

Stiviano says she did not leak the tape but that it was actually a friend she had confided in after she contemplated quitting her job as Sterling's assistant.

Stiviano has been bombarded by paparazzi since that tape leaked. Stiviano told Walters she's been sporting a visor because it eases her pain.

Though Stiviano is seen as a hero by some for exposing Sterling, others don't view her so favorably and her best friend Karrine Steffans fears for the alleged mistress' life.

"I fear for her safety. I've gotten a lot of phone calls, a lot them are frightening."

And those sexual allegations? Steffans adamantly denies they're true.

"That's not the truth, I'd be shocked if V. Stiviano had sex with that man." (Via The Insider)

Coming from Stiviano herself, she told Walters being a mistress is the public's biggest misconception about her. But Sterling's wife Rochelle says otherwise.

Deadspin reports Rochelle filed a lawsuit in March accusing Stiviano of seducing her husband, and other wealthy older men, in order to reap financial gains.

Stiviano says she has asked Sterling to apologize for his taped comments.