Don't Ignore The Missouri And Illinois Primaries On 'Mega Tuesday' 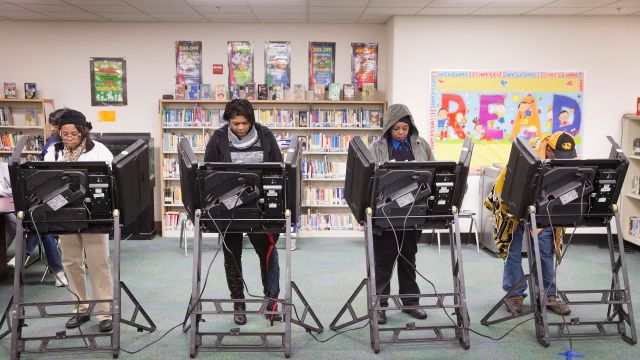 Heading into Tuesday's presidential primary, two states seemed to get most of the attention.

"So much attention on Ohio and Florida," MSNBC anchor Steve Kornacki said.

And we weren't the only ones who noticed.

"How often have you heard the words Florida and Ohio?," Newsy's Christian Bryant asked.

"A lot more than I've heard the word Missouri recently," a University of Missouri student said.

"I haven’t really heard that much about Missouri," a Missouri resident said.

"How often do you heard 'Florida and Ohio'?," Bryant asked.

"All the time," another University of Missouri student said.

Yeah, the Show-Me State and the Prairie State were outshined by the winner-take-all states in coverage leading up to so-called Mega Tuesday, but don't sleep on Missouri and Illinois.

For the GOP contest, winner-take-all Ohio and Florida offer 165 combined delegates. Missouri and Illinois? If you get enough of the vote, you can still grab all 121 delegates. So fewer but not that much fewer.

And FiveThirtyEight points out that's important. If Donald Trump sweeps Ohio, Florida, Missouri and Illinois, he only needs to grab 44 percent of the remaining delegates to get the Republican nomination.

If Trump loses Ohio and Florida and only grabs a portion of Missouri and Illinois, he'd need almost two-thirds of remaining delegates. A whole different ballgame.

And now consider polling. Here's the polling in Ohio from RealClearPolitics. Here's a very, very small portion of polls from Florida. But polling info in Missouri and Illinois is much more … sparse. Just eight polls total among both states, and two of those were within the margin of error.

To my fellow North Carolinians, sorry you haven't gotten a mention. Although it has the second largest amount of delegates available Tuesday, there's no winner-take-all scenario.

The point here is Florida and Ohio have lots of delegates up for grabs. But Tuesday is a big day for the GOP presidential primary, and we still don't know how those two other important states are going to vote.