Don't Get Too Worried About Attendance At The Copa America 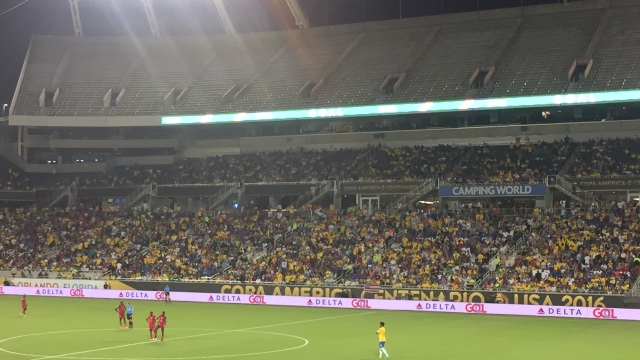 If you've tuned in to the Copa America Centenario so far, it's been hard to ignore the empty seats at many of the stadiums.

But despite all the headlines about dwindling attendance for the international soccer tournament, saying there's not enough fan enthusiasm might be a step too far.

Part of what makes the attendance look worse is that the Copa is being played in much larger venues this year. Last year, no Copa venue fit more than 50,000 fans — far less than the Rose Bowl or MetLife Stadium hold.

And let's not forget, Copa tickets don't come cheap. The cheapest seat you'll find for any of the matches will cost about $50, which seems like a lot given all those unfilled seats.

On top of that, the Copa America just isn't that well-known by most Americans. The English-language broadcast of last year's final only drew about a half-million fans on TV, about one-third of what this year's opening match drew.

There's still time for attendance to increase, too. Both the U.S. and Mexico made it through to the knockout stage of the tournament, which is good news for fan interest.

So on the whole, maybe let's not worry so much about the empty seats in American stadiums. This isn't the World Cup, after all.

This video includes clips from Kick and Univision and images from Delta News Hub / CC BY 2.0 and Getty Images. Music provided courtesy of APM Music.