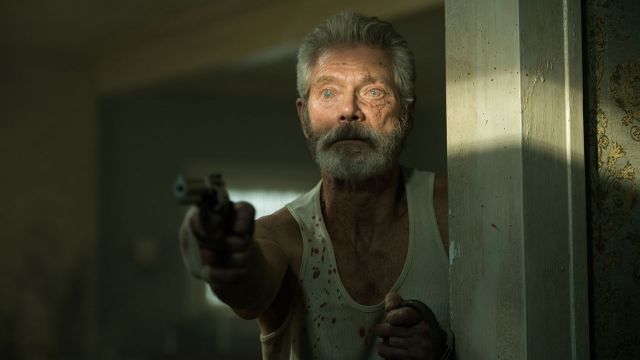 SMS
Box Office Top 3: 'Don't Breathe' Chokes The Competition In Top Spot
By Jamal Andress
By Jamal Andress
August 28, 2016
After weeks at the top, "Suicide Squad" was kicked to No. 2 by three kids and a blind man — and rightfully so.
SHOW TRANSCRIPT

Imagine Liam Neeson in "Taken" … but blind. That's kinda what this guy is like.

Taking the No. 1 spot this week is "Don't Breathe," bringing in an estimated $26 million in its debut weekend. That's the best R-rated original horror flick opening not only for this year, but in the past three years.

"The Conjuring" was the last original horror flick to bring in more money in its debut frame. What's more, this film — like "The Conjuring" — has gotten a lot of love from critics.

"Don't Breathe" carries a solid 87 percent on Rotten Tomatoes, which is spectacular for a horror flick. Not only that, but it managed to push this long-running No. 1 out of the top spot.

After three long weeks at the top of the chart, "Suicide Squad" has slipped to No. 2. The band of misfits brought in an estimated $12 million this weekend — Warner Bros. can throw this weekend's haul on top of the $600 million plus it has brought in so far.

And moving up this week to No. 3 is "Kubo and the Two Strings."

The animated action film brought in an estimated $7.9 million in its sophomore weekend, just squeaking past "Sausage Party," "Pete's Dragon" and "Mechanic: Resurrection," the other new film this weekend — where Jason Statham plays this guy, minus the sarcasm.

As for next week, Oscar bait: The Movie. (It's also known as "The Light Between Oceans.")