Don McGahn Says He Will Not Appear Before House Judiciary Panel 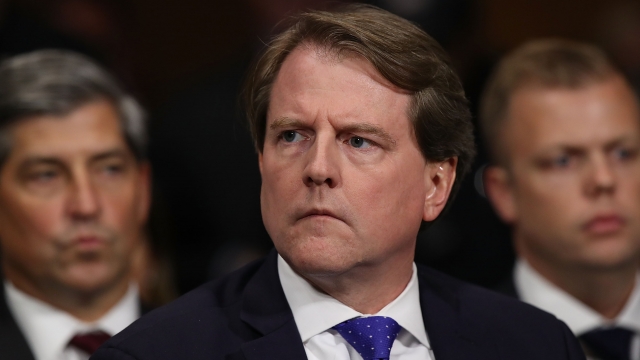 The former White House counsel's lawyer says he won't appear before the House on Tuesday, despite a congressional subpoena.

McGahn's lawyer confirmed Monday that his client will not appear at Tuesday's hearing. In a letter, his lawyer said: "It is our view that the Committee's dispute is not with Mr. McGahn but with the White House. Mr. McGahn remains obligated to maintain the status quo and respect the President's instruction."

The committee wanted McGahn to answer questions related to special counsel Robert Mueller's report. The announcement that he won't show comes just five days after the White House told the committee to "discontinue the inquiry" into President Donald Trump.

In a statement on Monday, press secretary Sarah Sanders also denounced the House panel's inquiry, saying, "The Democrats do not like the conclusion of the Mueller investigation — no collusion, no conspiracy, and no obstruction — and want a wasteful and unnecessary do-over."

The House Judiciary Committee already voted to hold Attorney General William Barr in contempt for not handing over the complete, unredacted Mueller report. The committee's chairman has threatened to hold McGahn in contempt if he doesn't appear.