Domino's Tries (And Fails) To Deliver Pizza Via Reindeer In Japan 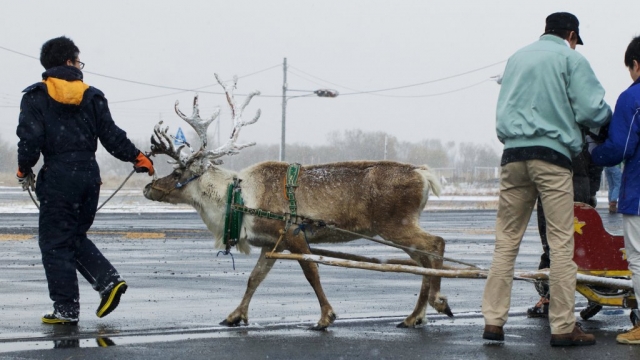 SMS
Domino's Tries (And Fails) To Deliver Pizza Via Reindeer In Japan
By Lindsey Pulse
By Lindsey Pulse
December 2, 2016
Turns out, only Santa has the ability to control the antlered animals.
SHOW TRANSCRIPT

This just in: Reindeer and pizza do not mix.

American pizza chain Domino's announced it would be using reindeer to deliver pizza to customers in Japan.

In an ideal world, the reindeer would pull sleds carrying fresh pizza. Each sled would have a GPS that tells customers where their pie is — just like with human deliveries.

Starting in December, the normal delivery icon would have reportedly switched to a reindeer.

But it turns out, reindeer can't really be trained. Shocker.

After a rough test run, the company said the animals were "difficult" to control.

Rather than give up the idea entirely, Domino's is dressing up delivery scooters to look like reindeer.

Domino's in Japan, we salute you. It was a valiant effort.