Domestication Might've Been Bad For Horses 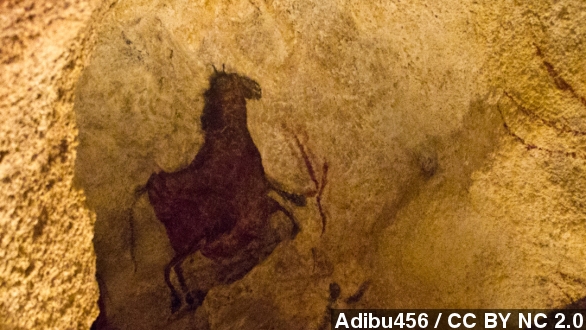 Scientists tracing the horse's genome have found as humans domesticated the wild horse thousands of years ago, they affected the horse's DNA.

Scientists looked at two samples from the Taymyr Peninsula in Siberia, one of which dates back some 16,000 years and the other more than 40,000 years — well before humans domesticated horses. (Video via National Geographic)

In their research, two groups of genes covering social behavior, learning capabilities and muscular development, among other traits, could've been key in the domestication process.

By comparing the genetic samples from Siberia with the genome of domesticated horses, scientists were also able to see how human domestication could negatively impact horses — specifically through inbreeding.

Researchers found that by domesticating wild horses, humans created a bottleneck, basically limiting the diversity of the horse's gene pool and opening the door to a number of genetic defects. (Video via U.S. Bureau of Land Management)

Those defects and the other genetic effects of inbreeding are in line with a hypothesis known as the cost of domestication, which says harmful genetic mutations become more common as humans selectively breed species.

The earliest evidence for horse domestication comes from Kazakhstan, where scientists found traces of mare's milk in pottery tracing back some 5,000 years. (Video via YouTube / Karachai Cherkesia)

The scientists in the study say it shows how sequencing ancient genomes can shed light on how the domestication process works.