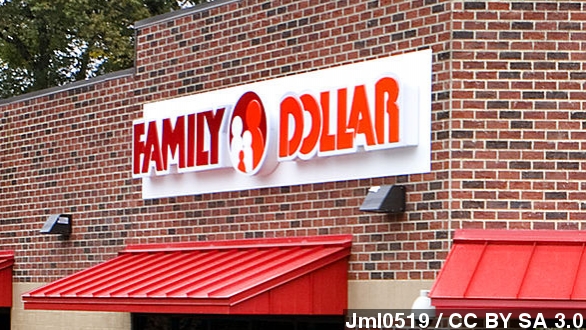 ​It took a whole load of its namesake — but Dollar Tree has announced it plans to acquire its larger rival Family Dollar. (Via Mike Kalasnik / CC BY SA 2.0, Jml0519 / CC BY SA 3.0)

The $8.5 billion merger comes one month after Family Dollar's largest shareholder Carl Icahn, who has a more than nine percent stake in the company, pushed for its sale. (Via Forbes)

The discount retailer has been struggling with increasing competition and fewer sales, forcing the closure of nearly 400 stores nationwide. (Via The Family Dollar)

But despite the closings, Dollar Tree will continue to operate both brands in the U.S. and Canada. The company says the move will reach a broader customer base.

"Family Dollar has multi-price points, ... and they tend to be more for Americans with low pay in cities or out in the country where there isn't a big store. Dollar Tree tends to be a dollar or less." (Via HLN)

The low price tag is also not the only thing that attracts most consumers to discount stores like Dollar Tree. As Businessweek points out, many in smaller households prefer small-scale shopping compared to larger wholesalers like Costco.

The merger will put the brands ahead of their closest competitor Dollar General — which, according to CNN, generates about $1 billion less revenue than Dollar Tree and Family Dollar stores combined. (Via Ildar Sagdejev / CC BY SA 3.0)

According to CNBC, the merger will result in about $300 million in annual savings for the companies.

Shares in both companies have jumped amid talks of the merger. The deal is expected to close next year.