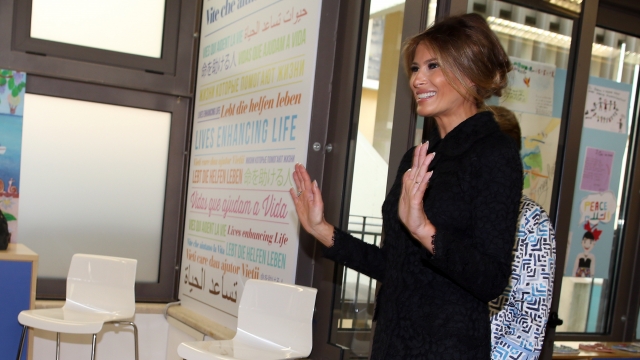 Dolce & Gabanna is a go-to brand for Trump. She wore the designer's clothes in her first official White House portrait and to meet Pope Francis.

And in May, there was public outcry after Trump wore a $51,500 Dolce & Gabbana jacket.

Now, the fashion brand is turning backlash its received into a mock fashion campaign it's calling #BoycottDolceGabbana.

It's even gone so far as to create boycott T-shirts that will sell for almost $250.

Plenty of other designers — including Marc Jacobs, Tom Ford and Zac Posen — have stated they won't dress Trump.

Though, in some ways, those choices are irrelevant because first ladies aren't technically supposed to accept free clothes from designers. So Trump can purchase whatever she likes.

Dolce & Gabbana's support could mean even more now that Trump is living in the White House — a place her fashion choices will be a lot more visible.

Case in point: In all of the photos of her moving in, she's wearing — what else — a top by Dolce & Gabbana.