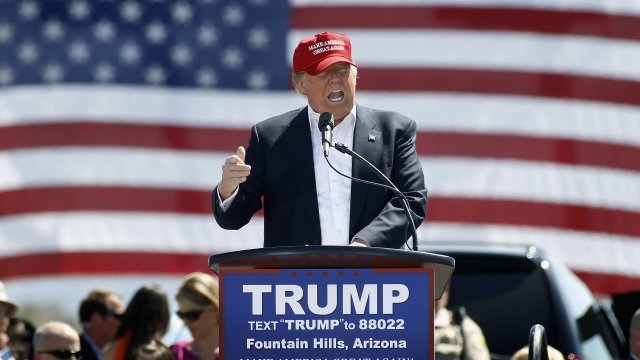 SMS
DOJ Says Watchdog Will Look Into Trump Campaign Surveillance
By Katherine Biek
By Katherine Biek
May 21, 2018
The announcement came after President Trump said he planned to order an investigation into whether his campaign was spied on "for political purposes."
SHOW TRANSCRIPT

The Department of Justice asked its internal watchdog to look into whether there was any political motivation in the FBI's investigation of President Donald Trump's 2016 campaign.

The request came after Trump tweeted on Sunday that he planned to order an investigation into whether the FBI or DOJ "infiltrated or surveilled" his campaign "for political purposes."

The DOJ announced back in March that its inspector general would look into potential abuses of the Foreign Intelligence Surveillance Act. It's now folding Trump's demand into that investigation.

In a statement released Sunday, Deputy Attorney General Rod Rosenstein said, "If anyone did infiltrate or surveil participants in a presidential campaign for inappropriate purposes, we need to know about it and take appropriate action."

Rudy Giuliani, one of Trump's lawyers, told CNN he didn't think Trump would sit for an interview with special counsel Robert Mueller without access to information on that confidential source.

Giuliani also said Mueller's office told the president's team that the part of the Russia investigation involving Trump could be wrapped up by the start of September if he agreed to answer Mueller's questions.