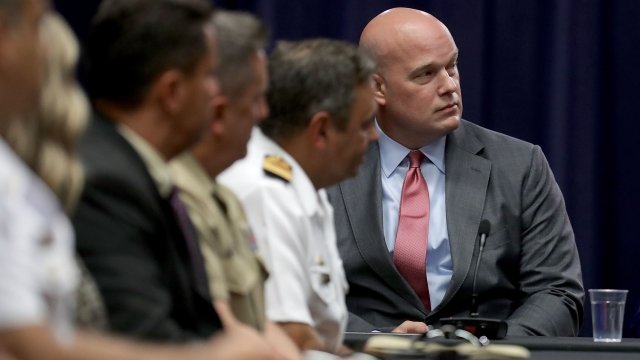 By Cristina Mutchler
November 14, 2018
In a memo Wednesday, the Justice Department said because Matthew Whitaker's appointment is only temporary, it's constitutional.
SHOW TRANSCRIPT

Its Office of Legal Counsel released a memo Wednesday that states Whitaker can legally continue serving in that role, based on the Constitution, federal statutes and past precedent.

Critics of the appointment had argued that Trump violated the Constitution by tapping Whitaker for the position without first getting Senate approval.

But according to the DOJ, because Whitaker is only serving on a temporary basis, there's no Senate confirmation requirement.

Whitaker was picked to oversee the DOJ last week after former Attorney General Jeff Sessions was asked to resign. The move sparked concerns about special counsel Robert Mueller's Russia investigation, as both Trump and Whitaker have expressed disapproval of the probe. Sessions had recused himself from overseeing the investigation, so Deputy Attorney General Rod Rosenstein was in charge of it.

On Thursday, a group of House Democrats called for emergency hearings to look into Sessions' firing.