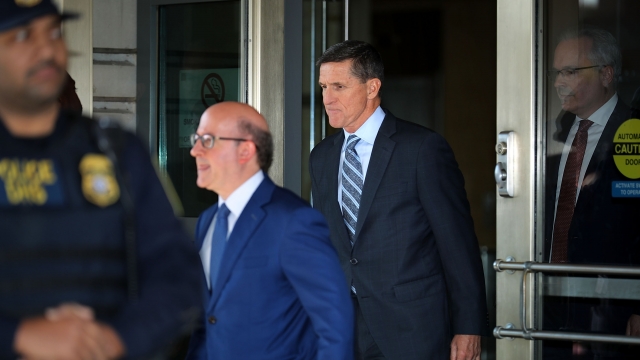 SMS
DOJ Recommends Jail Time For Ex-Trump Adviser Michael Flynn
By Johannah Grenaway
By Johannah Grenaway
January 7, 2020
The DOJ recommended that Flynn receive up to six months because "the sentence should also deter others from lying to the government."
SHOW TRANSCRIPT

On Tuesday, prosecutors filed a 33-page memo points to Flynn's "failure to accept responsibility" by attempting to change his guilty plea and to "his affirmative efforts to undermine the prosecution of Bijan Rafiekian," his former business partner. For those reasons, the government recommends he spend up to six months in jail.

Prosecutors said: "It is clear that the defendant has not learned his lesson. He has behaved as though the law does not apply to him, and as if there are no consequences for his actions."

Back in 2017, Flynn pleaded guilty to lying to federal investigators with regard to Robert Mueller's investigation. He was initially supposed to be sentenced in December 2018, but it's been delayed several times.

At first, Flynn cooperated with investigators. But after changing up his legal team he tried to alter his testimony about Rafiekian, which DOJ prosecutors say sabotaged the case after Rafiekian was ultimately acquitted.

The DOJ said "lying to the FBI, in any context, cannot be tolerated" and that sentencing Flynn "should also deter others from lying to the government."

Flynn is scheduled to be sentenced on Jan. 28.