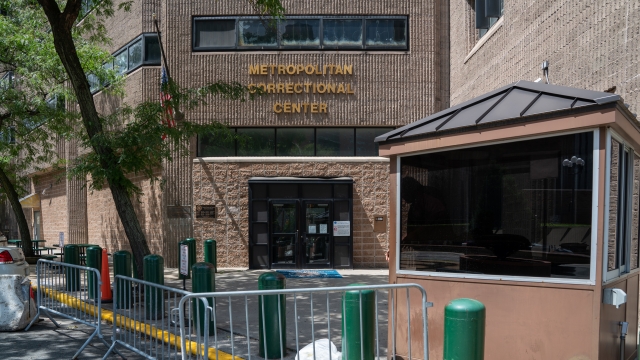 SMS
DOJ Temporarily Reassigns Warden Of Jail Where Epstein Died
By Katherine Biek
By Katherine Biek
August 14, 2019
The Justice Department says two other workers at the jail were placed on administrative leave, pending the outcome of its investigation.
SHOW TRANSCRIPT

The warden of the Metropolitan Correctional Center in New York where Jeffrey Epstein died has been temporarily reassigned. The Justice Department says two other workers at the jail were placed on administrative leave.

Attorney General William Barr ordered the move Tuesday — one day after he spoke out about "serious irregularities" at the federal jail.

"I was appalled — and indeed the whole department was — and frankly angry to learn of the MCC's failure to adequately secure this prisoner," Barr said.

Epstein, who was accused of sexually abusing dozens of teenage girls, died Saturday. Just two weeks before, Epstein was found semi-conscious in his cell and placed on suicide watch. But he reportedly was not on suicide watch at the time of his death.

Multiple outlets report one of the two guards in charge of watching Epstein at the time of his death was not a correctional officer. That may not be unique to this case. Federal prisons have reportedly resorted to using support staff such as teachers, clerical workers or nurses when there aren't enough correctional officers to go around.

Additionally, investigators are looking into whether guards falsified reports to show they checked on Epstein every 30 minutes as required by jail policy. Sources told The New York Times the guards didn't do those checks for several hours.

The FBI and the Justice Department's inspector general are both investigating Epstein's death.