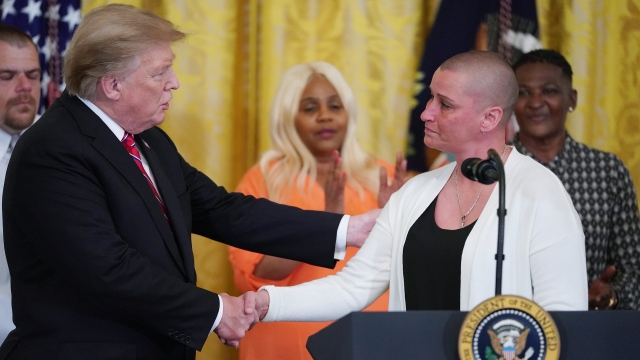 SMS
DOJ Starts Releasing First Of Nearly 3,100 Inmates For Good Behavior
By LeeAnne Lowry
By LeeAnne Lowry
July 20, 2019
The Justice Department has been criticized about being slow to put the new criminal justice reform law into practice.
SHOW TRANSCRIPT

The Department of Justice has announced a major step forward in implementing a new criminal justice reform law.

Deputy Attorney General Jeffrey Rosen said at a press conference Friday, "And starting today at prisons around the country nearly 3,100 inmates are being released from BOP custody due to the increase in good time credits applied to reduce their sentences under the First Step Act."

The bipartisan First Step Act is meant to ensure people come home from prison ready to succeed in the workforce. One part of the legislation lets inmates earn more days off of their sentences for good behavior every year, and it was applied retroactively when President Donald Trump signed it last year.

The Justice Department has been criticized about being slow to put the new rules into practice. Rosen asserted on Friday that the act will be implemented "fully and on time." He also mentioned that the department redirected $75 million from the Bureau of Prisons to fund the law for this fiscal year.

To be clear — not all of the 3,100 released inmates are going home. According to The New York Times, about a third of the prisoners are subject to detainers. That means they will either be transferred from federal prison to serve state prison sentences, or they'll be sent to immigration court.