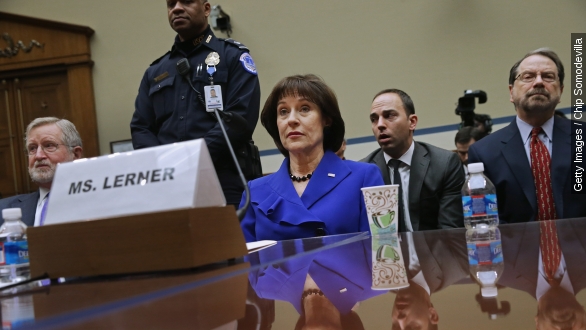 Lois Lerner, the former IRS official at the center of the IRS targeting scandal, won't be charged with contempt of Congress.

Lerner is accused of directing the IRS to put conservative and tea party groups under special scrutiny when they applied for tax-exempt status.

Whether she actually broke any laws is still being investigated by the FBI. But Wednesday, news broke that a different legal worry was coming to an end.

The issue was Lerner's refusal to answer questions about the scandal in two congressional hearings.

"On the advice of my counsel, I respectfully exercise my Fifth Amendment right and decline to answer that question," Lerner said.

Rep. Darrell Issa didn't accept her plea, pointing to her opening statement in May 2013.

"I have not done anything wrong," Lerner said.

Issa claimed that by saying she hadn't done anything wrong, Lerner had waived her right to plead the Fifth. The House charged her with contempt in May of last year. (Video via C-SPAN)

The U.S. attorney involved in the case disagreed, saying he would not take the charges to a grand jury.

In a letter to House Speaker John Boehner on Tuesday, he said, "Ms. Lerner's general denials of wrongdoing did not amount to 'testimony' about the actual facts."

Lerner had faced up to a year in prison and a large fine if found guilty of contempt. The FBI is expected to release its results from the other investigation soon, but analysts think it's unlikely she'll be charged there, either.