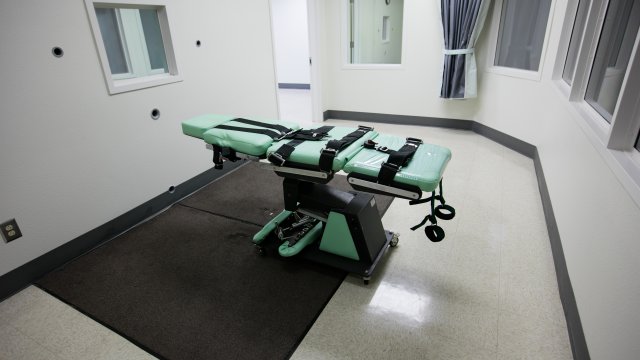 SMS
DOJ Says FDA Doesn't Have Authority Over Lethal Injection Drugs
By Briana Koeneman
By Briana Koeneman
May 15, 2019
The DOJ said in an opinion the FDA can't stop states that have the death penalty from trying to import the drugs.
SHOW TRANSCRIPT

The Justice Department says the Food and Drug Administration doesn't have the authority to regulate drugs used in lethal injections.

The DOJ's Office of Legal Counsel said in a legal opinion issued earlier this month "articles intended for use in executions carried out by a State or the federal government cannot be regulated as 'drugs' or 'devices.'"

Therefore, the opinion says, the FDA doesn't have jurisdiction over them, and it can't stop states that have the death penalty from trying to import them.

States have had trouble obtaining lethal injection drugs in recent years due to shortages. And the anesthetic sodium thiopental has been particularly difficult to get.

The only American manufacturer of sodium thiopental stopped making it in 2009. A few years later, a court injunction required the FDA to block any imports of the drug "on the grounds that it was unapproved and misbranded."

And the agency did just that in 2015 when it confiscated shipments of the drug that Arizona and Texas tried to bring in from outside the country. Texas sued the FDA as a result.

Because the FDA is still operating under the 2012 injunction, it's unlikely the DOJ's opinion will have an immediate effect on the agency.