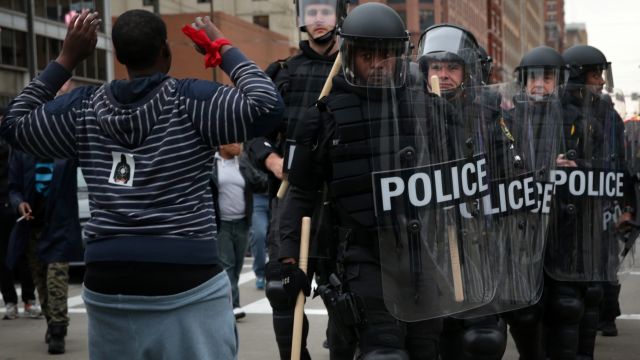 The U.S. Justice Department report lists concerns about use of force, investigations of sexual assault and civil rights violations.

"BPD engages in a pattern or practice of conduct of making unconstitutional stops, searches and arrests," said Vanita Gupta of the U.S. Department of Justice.

Just one day after the two-year anniversary of Michael Brown's shooting death in Ferguson, Missouri, the Department of Justice released a damning, more than 160-page report on the Baltimore Police Department — a department that came under fire following the 2015 death of Freddie Gray.

SEE MORE: Beyond Ferguson: Municipal Courts Are Still A Problem In Missouri

"African Americans accounted for 95% of the 410 individuals the police department stopped at least 10 times. Indeed one African American man was stopped 30 times in less than four years with none of the stops resulting in a citation," Gupta said.

The report further lays out concerns surrounding use of force, investigations of sexual assault and civil rights violations.

Baltimore Mayor Stephanie Rawlings-Blake asked the Department of Justice to do a full civil rights investigation after Gray died.

The investigation into the department is one of many in recent years. Since President Barack Obama took office, more than two dozen local police departments have undergone DOJ civil rights investigations.