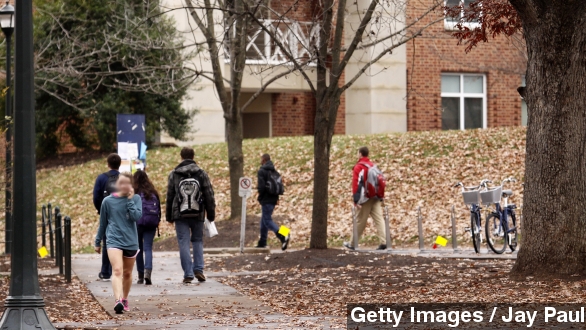 The report from the U.S. Department of Justice tracked rape and sexual assault cases of females between the ages of 18 and 24 both in and out of school for nearly the last two decades.

The researchers found just 20 percent of students who experienced sexual assault and 32 percent of non-students reported the incident to police.

The report also says, in those cases, about a quarter of those women didn't tell authorities because they felt it was a personal matter, one in five feared they'd face reprisal for speaking up about it and about one in ten felt it wasn't important enough to report.

Interestingly, one of the other findings calls into question a widely-cited statistic from a Campus Assault Study in 2007: that one in five female college students will either experience sexual assault or an attempt at it.

Thursday's report says the figure is more like six-tenths of one percent. So why are the numbers so far off?

A writer for Vox says, in the 2007 study, the sample size was small: just two universities. And the author of the survey said it was never intended to be representative of a larger population, which critics say questions its reliability.

President Obama said, "An estimated one in five women is sexually assaulted in college, and that's totally unacceptable."
It's also the same figure the Obama Administration quoted for its new White House Task Force on Protecting Students from Sexual Assault over the Summer.

Which started a wave of public awareness campaigns to bring attention to the issue.

A writer for Slate argues, while "sexual assault on campus is a serious problem," using questionable statistics could overstate the problem and may lead to over-corrective and "misguided policies that infringe on the civil rights of men."

Perhaps a Forbes writer sums it up best:

"Whatever its prevalence, sexual violence on campus is totally unacceptable and must be addressed. But politicians using exaggerated numbers to incite a moral panic is not the answer."