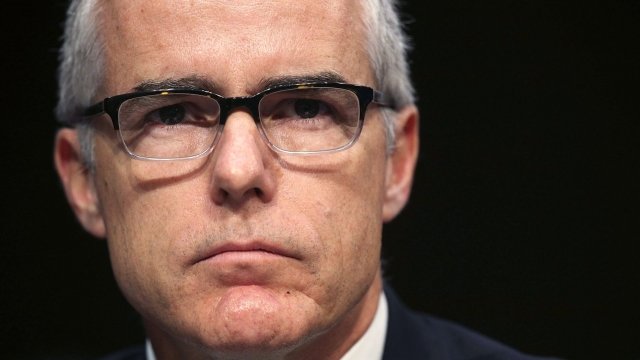 SMS
DOJ Refers Case Against Andrew McCabe To Top Federal Prosecutor
By Jake Jones
By Jake Jones
April 19, 2018
The former FBI deputy director was fired in mid-March on accusations he lacked candor; a Justice Department report seems to back up that narrative.
SHOW TRANSCRIPT

Investigators sent the case against former FBI Deputy Director Andrew McCabe to a federal prosecutor for potential criminal charges, according to The Washington Post.

The Justice Department inspector general referred the case to a prosecutor in Washington, D.C. The DOJ has accused McCabe of lying to investigators under oath as well as misleading his former boss, then-FBI Director James Comey.

It's important to note the referral doesn't mean McCabe will be charged with a crime. It does mean the prosecutor has the power to bring charges.

McCabe was fired in mid-March on accusations he lacked candor; the DOJ report seems to back up that narrative.

McCabe has denied any wrongdoing and claims his firing was politically motivated. McCabe did set up a GoFundMe page to raise donations for his legal defense; that might suggest he was preparing for possible criminal charges.