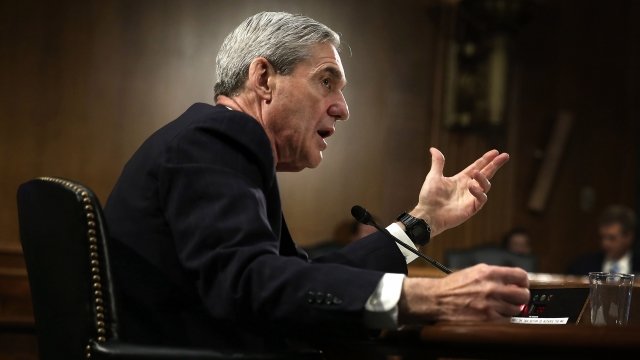 SMS
DOJ Gave Mueller Permission To Investigate Manafort
By Katherine Biek
By Katherine Biek
April 3, 2018
Mueller's team laid this out in a court filing as part of a case involving Manafort, who's trying to get some of his criminal charges thrown out.
SHOW TRANSCRIPT

Special Counsel Robert Mueller was given permission by the Justice Department to investigate allegations that former Trump campaign manager Paul Manafort colluded with the Russian government.

Monday's court filing is part of a case involving Manafort — who's asked a D.C. judge to throw out some of the criminal charges against him.

Manafort's lawyer argued Mueller shouldn't be able to indict Manafort for what he did before joining the Trump campaign in 2016.

Mueller's team is trying to prove they do have the authority to investigate alleged crimes Manafort committed, even his ties to Ukraine — with the Justice Department's approval.

Manafort hasn't been charged with anything relating to Russian interference or the 2016 presidential election. He's scheduled to appear before a jury in Virginia in July, and then his Washington, D.C. trial will begin in September.