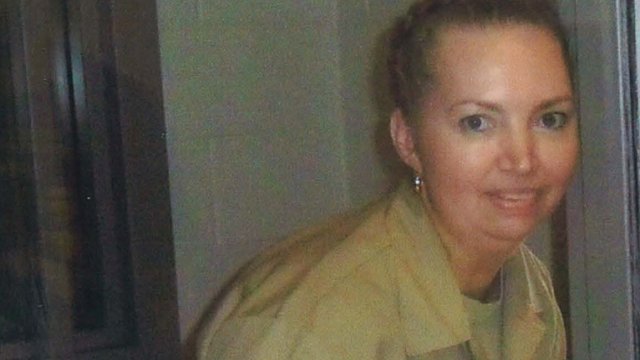 Cory Johnson and Dustin Higgs are also scheduled to be executed this week but both executions were postponed by an appeals court.

After a flurry of court activity, two of the three federal death row inmates scheduled to be put to death this week have had their executions delayed by a federal court.

The executions of Cory Johnson and Dustin Higgs have been postponed because both inmates tested positive for COVID-19.

But the execution of Lisa Montgomery proceeded Tuesday night after a pair of Supreme Court rulings overturned two lower court delays in her execution. Montgomery is the first woman to be executed by the federal government since 1953. She was pronounced dead at 1:31 a.m.

The Eighth Amendment, outlawing cruel and unusual punishment, offers protection for mentally ill offenders who can't comprehend why they're being executed.

Montgomery, the only woman on federal death row, was sentenced to death in 2007 after strangling a pregnant woman to death before cutting out and kidnapping her baby in Missouri. Her defense team argues that severe mental illness makes her ineligible for the death penalty.

HENRY: "We do not execute people in this country who have her type of history of torture, abuse and mental illness."

Kelley Henry, Lisa Montgomery's attorney, has pointed to years of alleged abuse and rape by family members that led to severe PTSD and bouts of psychosis.

In the DOJ's appeal to push forward with the execution, it says there is no recent proof of Montgomery's 'lack of competence' and that the defense is just trying to delay this execution until President Trump leaves office.

BAUMLI: "We don't agree with life imprisonment and still getting privileges to see her family, her kids, et cetera, when the only place we have to go is her grave to see Bobbie Jo. I want to see the death penalty go through."

While President-elect Joe Biden has expressed his opposition to the death penalty in the past, the Trump administration has gone on a historic execution stretch, killing 10 federal prisoners in six months. If he carries out the remaining executions, it would make this administration the deadliest in U.S. history.

DUNHAM: "If anybody wanted to make a poster child of cases for why there are systemic problems with capital punishment, you couldn't do better than to select the cases that this administration has selected for execution."

Robert Dunham, the executive director of the Death Penalty Information Center, says not only is the number of executions unprecedented, but there are also significant problems with many of the cases in question, including Lisa Montgomery's.

DUNHAM: “Lisa Montgomery was a victim of child sexual abuse. …  Ironically, she got her notes of execution right smack in the middle of Domestic Violence Awareness Month. It’s this kind of being out of touch, it's this kind of abject cruelty that makes these death sentences inappropriate to carry out.”