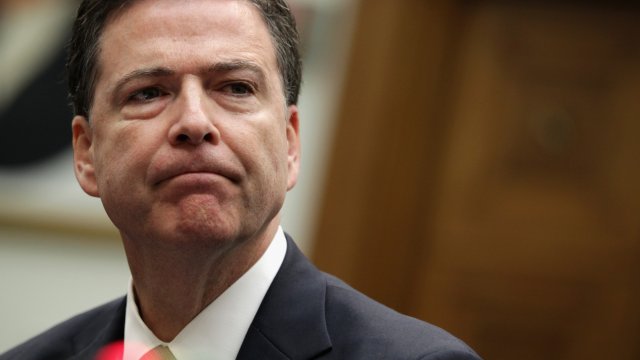 SMS
DOJ: Comey Violated FBI Policy By Keeping, Sharing Trump Memos
By Briana Koeneman
By Briana Koeneman
August 29, 2019
According to a report released by the inspector general's office, James Comey violated the agency's policies with his handling of the memos.
SHOW TRANSCRIPT

According to a report released by the inspector general's office Thursday, the former FBI director violated the agency's policies with his handling of the memos.

Comey shared one of the memos to a friend to give to reporters. The inspector general said that document included "sensitive" information. It details a conversation Comey had with President Trump during which the president asked him to stop an investigation into former national security adviser Michael Flynn.

Comey also kept four other memos in a personal safe at his house and provided them to his attorneys without the FBI's permission. It was later determined one of those memos contained information classified as "confidential."

The inspector general's report accused Comey of setting a "dangerous example" for current and former FBI employees who have similar access to or knowledge of non-public information. But investigators didn't find evidence that Comey or his attorneys released any of the classified information in the memos to the media.

Comey later quoted that section of the report on Twitter, adding: "I don't need a public apology from those who defamed me, but a quick message with a 'sorry we lied about you' would be nice."

Despite concluding Comey violated FBI policies, the Justice Department announced it will not prosecute him.