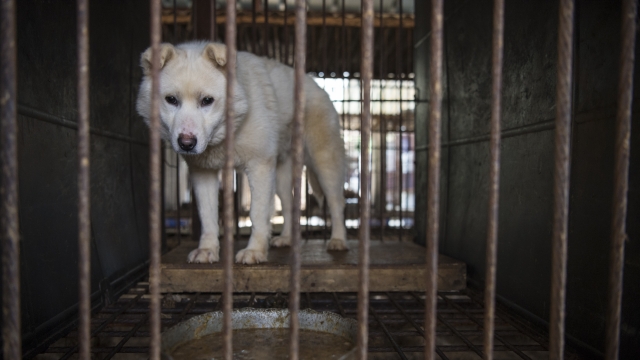 The 171 dogs and puppies were rescued from a farm in Wonju that has now closed, making it the fifth farm HSI has helped close in recent years.

The owner of the farm contacted the group and asked for its help in getting out of the dog meat business. In all, 250 dogs and puppies were rescued from this single farm.

Most South Koreans don't eat dog meat regularly, but it is consumed more during the annual Bok Nal festival and throughout the hot summer months because many believe it cools their blood.

A majority of the rescued pups will head to a temporary emergency shelter in New Jersey, and the others will be transported to one of 17 partner shelters in the U.S. or to foster families in Canada.

But once these dogs reach the U.S., many will likely need rehabilitation before going up for adoption. A shelter that took in dogs rescued from a meat farm in 2015 found that the adult dogs needed more emotional and behavioral help than the puppies. But after working with shelter volunteers, nearly all the dogs were adopted.