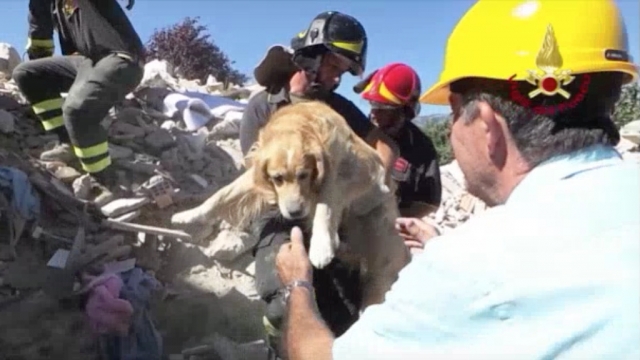 SMS
Found In Italy's Earthquake Rubble: One Lucky Pup
By Lindsey Pulse
By Lindsey Pulse
September 3, 2016
A pup named Romeo was found in debris in Amatrice, one of the worst-hit areas in central Italy.
SHOW TRANSCRIPT

The dog, named Romeo, was found among piles of debris. Members of Vigili del Fuoco, Italy's fire and rescue service, can be seen attending to the pup after they rescued him.

Firefighters found Romeo in Amatrice, where a lot of rescue efforts have been focused. Amatrice was one of the worst-hit areas in Italy.

Despite being trapped for more than a week, Romeo enthusiastically met his rescuers and appears to be doing fine.

And Vigili del Fuoco has rescued even more little creatures. The service found a cat five days after the quake and rescued a bird on Thursday.

At least 290 people are known to have died in the quake, and cleanup efforts have only just begun.

Amid the cleanup, authorities are investigating property owners for building code violations.

They say they believe alterations made to century-old structures might not have complied with seismic standards, so the quakes might have caused more damage than they should have.