Dog Brought In To Be Surrogate Parent To 5 Cheetah Cubs 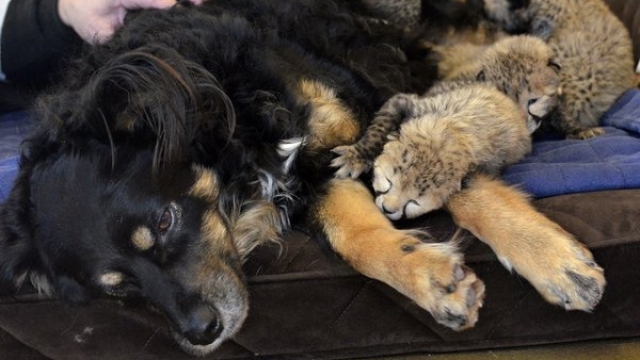 An Australian shepherd has become an unexpected surrogate parent to five cheetah cubs who lost their mother.

Staff at the Cincinnati Zoo performed a cesarean section on the 5-year-old cheetah mother, Willow, earlier this month after she developed complications.

A team of veterinarians successfully delivered three males and two females, but the cubs require round-the-clock care due to weak immune systems.

But Willow never made a full recovery after the surgery, and she passed away.

That's when the zoo staff called in a dog named Blakely. He's a nursery companion who is brought in to help baby animals learn to socialize by snuggling and playing with them.

Blakely also teaches his charges certain behaviors as they get older. For instance, he taught this baby takin named Dale how to jump around.

TODAY reports Blakely has been brought in to help a variety of animals including wallabies, warthogs, aardvarks and even an ocelot.

It's especially important that Blakely was brought in to help care for these five cheetah cubs because the species is endangered.

At the most, only an estimated 12,000 cheetahs remain in existence today.

Blakely will care for the five cubs throughout the eight to 12 weeks they spend in the zoo's nursery.

This video includes clips from The Cincinnati Zoo & Botanical Garden and an image from _paVan_ / CC BY 2.0.