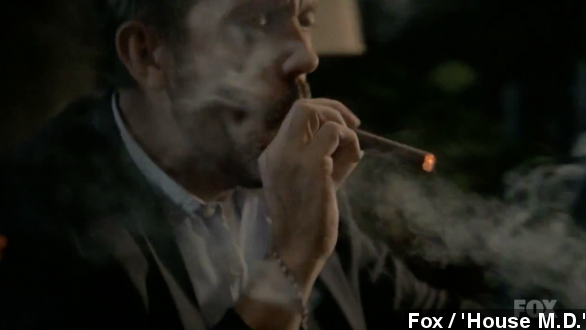 According to a new report, portrayals of smoking on U.S. television have dropped over the last few decades, and that might have contributed to a decrease in cigarette sales and smoking all around.

They found the number of instances of tobacco-related acts, including chewing tobacco and buying cigarettes, fell from almost five per hour in 1961 to 0.29 per hour in 2010 — and that decrease could have led to less smoking in real life. (Via Tobacco Control)

According to the Los Angeles Times, the study's lead researcher adds, "TV characters who smoke are likely to trigger the urge to smoke in cigarette users, making it harder for them to quit."

Smoking has declined over the years. The Centers for Disease Control and Prevention says 18 percent of adults in the U.S. currently smoke, compared to 42 percent in 1964. But it's still questionable whether smoking on television has influenced that decline.

According to Medical News Today, the study didn't take into account whether the depictions of smoking were positive or negative — or whether it was a villain or hero doing the smoking.

And even the researchers themselves say they didn't review cable television shows, especially those where smoking is commonplace, such as "Mad Men."

Still, the researchers claim a single instance of smoking per episode across two years accounts for the consumption of nearly two packs of cigarettes per U.S. adult. (Via WNBC)

​According to one of the researchers, the findings suggest television and other screen-based media are "an important factor to consider in continued efforts to reduce the burden of smoking related illness." (Via Los Angeles Times)

The researchers add future studies should look into the effects of tobacco portrayal on other media such as cable television and YouTube.