Does Tikrit Show Iran's Taken The Lead In Fighting ISIS? 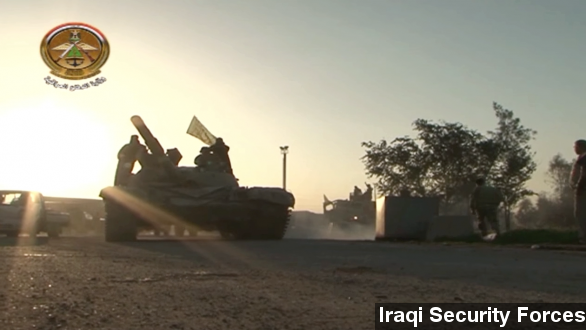 The good news is it seems ISIS is already being driven back in Iraq months before any armed forces try anything against the militants' Iraqi stronghold.

The other news more open to interpretation, there's one particular country getting a lot of attention for helping Iraqis in their fight to take back Tikrit.

"Being backed financially and militarily by none other than the Iranian government," Fox News' Sean Hannity said.

"Iranian commanders who are on the ground, essentially guiding this operation," CNN's Ben Wedemen said.

Tikrit is seen as a major test leading up to the battle for Mosul later this spring. The U.S. has estimated 23,000 Iranian-backed Shiite militiamen and Iraqi soldiers are attacking ISIS in the city. (Video via Iraqi Security Forces)

You can trust there are a lot of people uncomfortable with the prospect of Iran playing such a prominent role, especially as the U.S. and other world powers negotiate a nuclear deal with Iran.

Also remember Iran has been a major backer of Syria's President Bashar al-Assad, arguably one of the major figures to blame for much of the unrest now gripping the Middle East. (Video via BBC)

Shiited-led Iran wanting its neighbor to stay in Shiite hands is certainly easy to understand.

But even the U.S.'s military leaders — who are now benefitting from Iran increasing its role in the fight against ISIS — acknowledged this week Iran could be trying to expand its influence. (Video via Asaib al Haq)

When asked Tuesday whether it alarmed him Iran "has basically taken over the fight" against ISIS in Iraq, new Defense Secretary Ashton Carter said he was concerned and was watching the fight closely. (Video via C-SPAN)

That's because with Iran backing Shiite militias, there's also the ever-present concern a change of power in any Iraqi city will lead to more oppression or violence. Tikrit is a majority Sunni and the hometown of former dictator Saddam Hussein.

Thousands of refugees have fled the city as Iran and the Shiite militias approached and began retaking villages surrounding the city this week. (Video via Asaib al Haq)