Does Spielberg Have A 'Goonies' Sequel Idea? 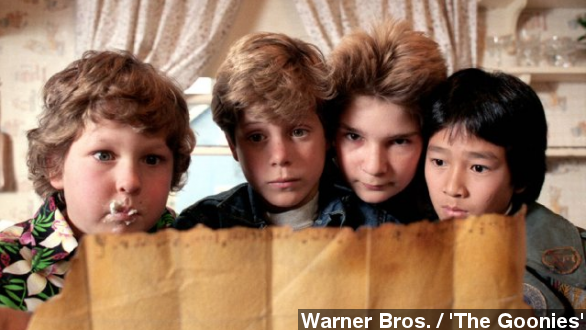 SMS
Does Spielberg Have A 'Goonies' Sequel Idea?

Remember that "Goonies" sequel rumor a few weeks back?

That was Richard Donner, the director of the 1985 cult classic. And now, it looks like Steven Spielberg, who came up with the original story and produced the first film, might also be on board.

Donner said to TMZ: "Steven came up with the idea of doing a sequel after 30 years. … And then he came up with another storyline, and he's right on."

Spielberg has yet to confirm Donner's admission, but that hasn't stopped Metro from getting excited. "This should get you really truffle shuffling." (Via VISO Trailers)

"Goonies" star Sean Astin is holding back his excitement for now. (Via Warner Bros. / “The Goonies”)

He told ABC talks of a sequel have been around since the first film hit theaters. But he adds: "If Dick [Donner] says the sequel is going forward, they must have found the magic. ... I've always said I'm open for everything."

"Wow. You guys realize what we could do?" (Via Warner Bros / "The Goonies")

The big question is just what will they do. What's the storyline?

Astin, Josh Brolin, Corey Feldman — these guys are all in their 40s now. Not to mention, both Jeff Cohen, who played Chunk, and Jonathan Ke Quan, or Data, have reportedly retired from acting. (Via Empire Magazine)

Despite the idea "conjur[ing] this strange concoction of excitement, nostalgia and dread," a writer for Cinema Blend came up with a few sequel suggestions, including a mature, R-rated "Goonies."

And /Film says, "The last script attempt involved a new group of kids, as the daughters and sons of the original Goonies gang, going off on a new adventure."

Bottom line here is, even without knowing the story, Spielberg's potential involvement has people talking. And the series is — as always — still alive because the "Goonies never say die."