Does Pistorius Have An Anxiety Disorder? 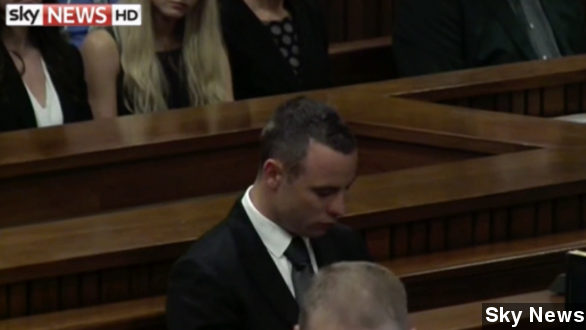 SMS
Does Pistorius Have An Anxiety Disorder?
By Amy Kluber
By Amy Kluber
May 12, 2014
A defense witness in the Pistorius murder trial claims the athlete has an anxiety disorder. The state now wants Pistorius' mental health evaluated.
SHOW TRANSCRIPT

The Oscar Pistorius trial began its eighth week, and new testimony from a defense witness could open the door to the Paralympian undergoing a psychiatric evaluation — a move that would delay the trial.

Forensic psychiatrist Dr. Meryl Vorster claims the 27-year-old's amputation and family problems experienced during childhood caused him to suffer from an anxiety disorder that leaves him "distrustful and guarded." (Via ENCA)

VORSTER: "He was aware that he was a public figure and believed that this made him at an increased risk of being attacked or burgled." (Via Sky News)

Pistorius is accused of murdering his 29-year-old girlfriend, Reeva Steenkamp, in his home last year — a charge Pistorius has denied. He claims it was an accident and he thought she was an intruder. (Via CNN)

According to Sky News, Vorster backs up those claims with evidence that Pistorius shows signs of anxiety and fear that cause him to "perceive his surroundings as being threatening when perhaps they're not."

And CNN reports Vorster attributes Pistorius' choice in brandishing a gun to face his perceived danger to a "fight or flight response." Because of his disability, she says he instinctively fights back instead of fleeing.

But according to BBC, prosecutor Gerrie Nel asked for the defendant to undergo psychiatric observation — suggesting someone with such a disorder who also carries a gun is a "danger to society."

NEL: "Is there a mental illness that may have impacted on his ability to act in accordance with understanding of right and wrong?" ​(Via SABC)

The court adjourned before a decision to that request had been made. But if the judge grants it, Pistorius could spend 30 days in a mental health institution. (Via BBC)

The trial is set to reconvene Tuesday. It's expected the defense would wrap up its case by the end of this week.