Does Pete Rose Deserve A Second Chance With Baseball? 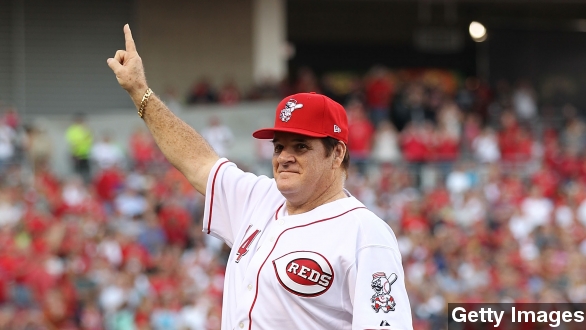 SMS
Does Pete Rose Deserve A Second Chance With Baseball?

By Briana Koeneman
August 23, 2014
Pete Rose believes he deserves a second chance after being banned from organized baseball 25 years ago. But some critics don't want to forgive him.
SHOW TRANSCRIPT

Sunday marks 25 years since Cincinnati Reds legend Pete Rose was banished from organized baseball for life after he was caught betting on the game.

But even after all these years in exile, the 73-year-old "hit king" says he deserves a second chance.

PETE ROSE TO ESPN: "America is a forgiving country, and if you do the right things — keep your nose clean, be a good citizen, pay your taxes, do all the things you're supposed to do — eventually you'll get a second chance."

Rose has been attempting to get his ban overturned ever since it was put into effect Aug. 24, 1989.

But as USA Today points out, an upcoming switch in the Major League Baseball commissioner's office could give Rose the forgiveness he's looking for.

You see, many of Rose's fans hope newly elected baseball commissioner Rob Manfred will pardon Rose when he takes office in January.

And there's always the possibility that outgoing commissioner Bud Selig will forgive him on his way out the door.

Rose retired from his beloved Cincinnati Reds after the 1986 season as baseball's all-time hit leader with 4,256 hits and 3,562 games under his belt, according to MLB.com.

He transitioned to become a player and manager for the Reds in 1984. And it was during his stint as manager that he started betting on the team. (Video via CNN)

According to a report later compiled by investigators, Rose bet on 52 Reds games in 1987 and wagered a minimum of $10,000 a day.

After being investigated and taken to court by the commissioner's office over allegations of illegal gambling in 1989, Rose signed a deal that put him on baseball's ineligible list for life.

The deal was basically a "no-contest" plea. With Rose's signature, the MLB agreed to stop its investigation into his alleged gambling.

And a year and half later, he was also banned from the Hall of Fame, even though his name is at the top of several all-time MLB records. (Via Great Museums Television)

But now, more than two decades later, many fans say the man known as "Charlie Hustle" has served his time.

As a writer for CNN put it, "A life sentence is unduly harsh. We live on an Earth in which past sins can be forgiven... A case could be made that Pete Rose needn't be crucified for what he did, that it wouldn't kill the game of baseball to finally let him off the hook."

But a few critics are still pointing out just how big of a deal Rose's wrongs really were.

The Atlantic notes the pertinent section of the rule Rose broke by betting on baseball — Major League Baseball Rule 21(d). "Any player, umpire, or club or league official or employee, who shall bet any sum whatsoever upon any baseball game in connection with which the bettor has a duty to perform shall be declared permanently ineligible."

And some aren't as willing to forgive Rose's violation of what many call "baseball's most sacred rule."

A writer for Sporting News boldly wrote, "Gambling is baseball's death sentence. For nearly a century, people in the game who place money on it have been condemned to the lower realms of purgatory. Pete Rose doesn't think he belongs in the infernal region. He is wrong."

Despite what his critics are saying, Rose says he believes he deserves America's forgiveness.

He recently told ESPN, "The last thing in the world I'd do now is bet on baseball. I would be the cleanest guy in the world when it comes to that because of the scrutiny I would go through. You may think I'm crazy, but I think baseball is in a better place if I'm in it."