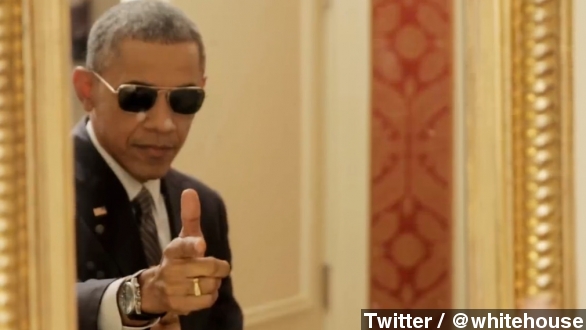 SMS
Does Obama's Goofy Buzzfeed Video Work For Young People?
By Jasmine Bailey
By Jasmine Bailey
February 12, 2015
President Obama doodled, took selfies and made silly faces in the mirror during a Buzzfeed video to promote Obamacare. Is it working?
SHOW TRANSCRIPT

Here's a riddle for you: What do President Obama, a selfie stick and milk and cookies have in common?

Give up? Nothing. Well, there is one thing: This BuzzFeed video.

Yup, apparently that's what Obama does when no one's around and if no one else noticed how dirty that mirror is, don't worry; I did.

Okay, on a serious note, what is the president of the United States doing doodling pictures of the First Lady on a BuzzFeed video? One word: Obamacare.

"The deadline for signing up for health insurance is February. Febru. ... February 15. ... Just go to healthcare.gov."

That little plug probably shouldn't come as a surprise. We've seen Obama joke around with Zach Galifianakis on "Between Two Ferns," and most recently he let some of YouTube's most famous users interview him — all in the name of reaching those young folks, who are actually pretty critical to the health care plan's survival.

And with that goal in mind, BuzzFeed was probably a good route. In 2013 the site's then-president and COO Jon Steinberg told NPR 60 percent of the audience were 18- to 24-year-olds.

"Young people really have no media that is their own. ... Memes and Web culture is their culture. ... We felt that we could be the place that they come to for their hard-hitting news and reporting."

But not everyone is down with Obama's goofy side.

A writer for The Washington Post asks "Which image of Obama mugging for BuzzFeed's cameras diminishes the presidency the most"?

The number one image — the mirror. I guess I wasn't the only one who noticed after all.

But apparently the writer takes a dirty mirror as some kind of metaphor. He asks: "Is this sequestration? Is it simply that Obama's people and BuzzFeed's people didn't really think about it? ... ? Or is it that this is a metaphor for the decline of the presidency under Barack Obama, to the extent that even the White House, a symbol of the people, is allowed to degenerate."

Yikes. If it's any consolation, the goofy vid was accompanied by a full transcript and clips of an actual interview.

With just days left on the clock to sign up for the Affordable Care Act, some 10 million people have selected plans through the program. If those people complete enrollment by paying for those plans, the White House will have surpassed its 9 million-person goal.