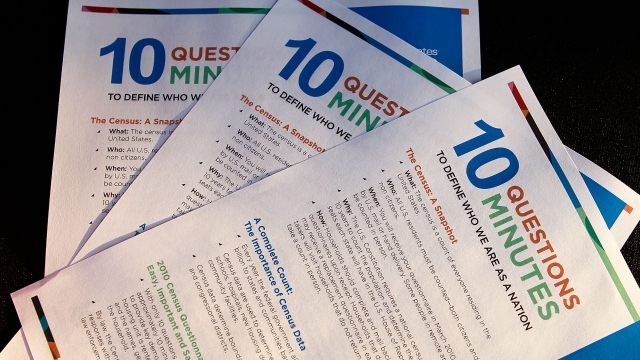 New evidence suggests the Trump administration's plan to add a citizenship question to the 2020 census was crafted in part to help give Republicans an electoral advantage.

The ACLU sent a letter to a federal judge on Thursday, saying Thomas Hofeller, a "longtime Republican redistricting specialist played a significant role in orchestrating the addition of the citizenship question ... in order to create a structural electoral advantage for, in his own words, 'Republicans and Non-Hispanic Whites.'"

The Trump administration announced last year plans to reinstate a census question asking respondents if they are U.S. citizens, arguing its inclusion would strengthen a provision in the Voting Rights Act that's supposed to prevent racial discrimination. But critics say the question would discourage non-citizens from responding to the census, which would lead to inaccurate population counts. A federal judge blocked the administration from adding the citizenship question in January, and after the administration appealed the ruling, the Supreme Court said it'll hear the case.

Hofeller died last year. But recently, his daughter stumbled upon a 2015 study he worked on. The study concluded that adding the question "would clearly be a disadvantage to the Democrats" when it came to redistricting. The ACLU letter also says evidence shows he "helped ghostwrite a draft DOJ letter requesting a citizenship question and "provid[ed] the Voting Rights Act enforcement rationale for doing so." The ACLU asked a federal judge to consider "sanctions or other appropriate relief" over the testimony of two Trump administration officials, whom the organization says lied under oath about the origins of the letter.

In response, the judge ordered the government to respond by Friday morning, and scheduled a hearing on the matter for June 5.

The Supreme Court is expected to hand down its decision on the matter in June, which also happens to be the same month the census is scheduled to be finalized for printing.