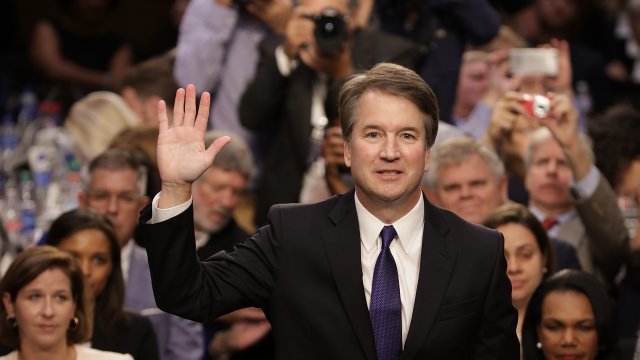 Confirmation hearings for Judge Brett Kavanaugh to the Supreme Court kicked off with a bang Tuesday, and it's not necessarily because of the nominee himself.

Just eight seconds after Senate Judiciary Chairman Chuck Grassley began his opening statements, Senate Democrats interrupted him, citing lack of transparency as reason to adjourn or possibly postpone the hearings. The back and forth lasted an hour and a half. It's all in the name of documents. Hundreds of thousands of them from Kavanaugh's time as staff secretary in the George W. Bush White House. In that role, Kavanaugh was the one responsible for what documents hit the president's desk.

Because of this position, there are likely more documents related to his work history than any nominee in recent history. Yet the Trump administration withheld more than 100,000 documents claiming executive privilege, something Sen. Dick Durbin says is unprecedented. Democrats say they need the documents to understand Kavanaugh's judicial philosophy.

Late Monday evening, hours before confirmation hearings began, the Senate was given 42,000 more pages of documents. Democrats say there was no possible way they could have gotten through them in a matter of hours.

Republican Sen. Thom Tillis said during Tuesday's hearing that with technology, it should be possible. But Democratic Sen. Kamala Harris said the White House got 57 days to review the same documents before they were released, making the timeline to review uneven. Harris also said the amount released was simply not enough.

This issue is one of the many the Democrats will likely utilize as they grill Kavanaugh in the coming days. Kavanaugh's stance on abortion, presidential power and health care will also remain at the forefront of the debate. Still, Democrats lack the votes to strike down this nomination on their own. They'd need the help of Republicans, and that's an unlikely task.