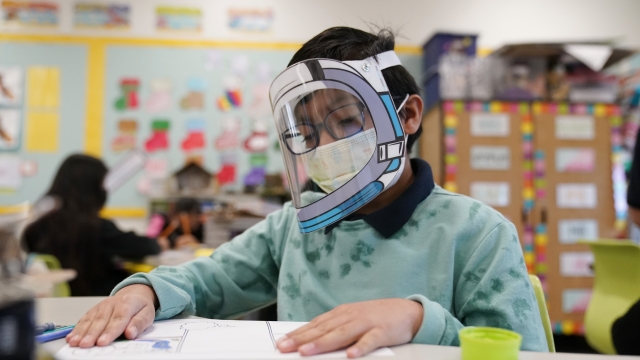 "As the numbers fall and you get back to doing what you're normally doing, things feel much, much better," he said. "But you know, again, in the back of your mind, you always worry, 'Hey, we can start coming up again.' Or, you know, 'Is there going to be another variant?'"

An offshoot scientifically known as Omicron sub lineage BA.2 is creeping up in dominance. In Denmark, it caused a COVID surge.

CDC numbers show BA.2 now makes up roughly 11% of sequenced COVID cases in the U.S., which is up 5 points from the week prior. In New England, it accounts for nearly a quarter of cases.

Early studies show BA.2 is 33% more contagious and more severe in the unvaccinated than its parent Omicron strain.

BA.2 can reinfect people recovered from a previous infection — though it's rare and mostly occurs in unvaccinated young people.

It's ripping through Hong Kong and driving up U.K. cases and hospitalizations. Age and waning immunity also factor in.

"That's really worrisome, and historically, U.K. has never had a wave that the U.S. has dodged," said epidemiologist Dr. Eric Feigl-Ding.

Feigl-Ding warned about the pandemic in January of 2020. He was criticized by some for being too alarmist at the time. But he was right.

"So I think we probably have about six weeks or so until you see a surge given how BA.2 is rising but rising in the underbelly while total cases are falling," Feigl-Ding continued.

Time will tell if a possible BA.2 wave could resemble the massive Omicron surge from winter. Some health experts worry relaxing masking guidance could help a spread.

The latest CDC stats have 90% of the country in areas who don't need to mask.

Britain has begun giving a second booster to at-risk groups.

About half of eligible Americans have gotten a COVID booster.

Back in Indiana, nurse Theresa Thompson is also mindful and ready for what may come next.

"People can still get sick from it, so I think it's important to still take all the necessary precautions," she said.