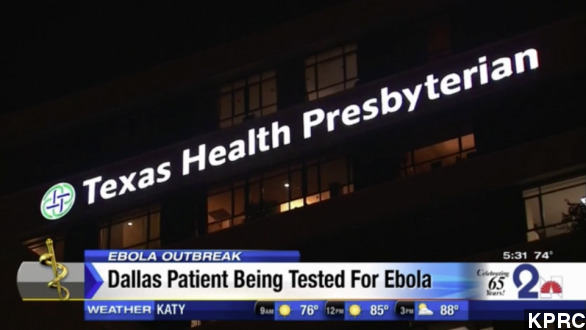 By Christian Bryant
September 30, 2014
After the announcement that the first U.S. patient had been diagnosed with Ebola, doctors were quick to say a U.S. outbreak is highly unlikely.
SHOW TRANSCRIPT

Following confirmation of the first case of Ebola diagnosed in the U.S., Texas health officials held a separate press conference Tuesday to reassure the public Ebola will not become widespread in the states.

Much of what was said in the second press conference has already been said before:

DR. EDWARD GOODMAN VIA KDFW: “It is not an airborne disease.”

But we also learned that the patient first went to the hospital Friday with non-specific symptoms and was given antibiotics. He was then brought back to the hospital by paramedics Sunday after symptoms worsened.

Health officials said they were ready for something like this and have already begun the process of tracking down people who might have come into contact with the patient — which CDC Director Tom Frieden said was one of the next steps in stopping the virus in its tracks.

Dallas Fire-Rescue told a KXAS reporter the paramedics crew that came into contact with the patient over the weekend will be monitored for 21 days, the virus' incubation period.

Texas health officials also said the patient is not being treated with the experimental drug ZMapp, which was given to earlier U.S. patients. Supplies of the drug were exhausted in August. (Video via Euronews)

WFAA: "The treatment is really the normal things that you would do with infectious diseases, like influenza: you'll give them fluids, you'll maintain their blood pressure. If they need blood products, you'll get that."

Frieden told reporters during his press conference there's little chance anyone on the flight with the patient, who was traveling from Liberia to the U.S., is at risk of being infected. He said Ebola is only contagious once someone begins showing symptoms and can only be spread through bodily fluids.