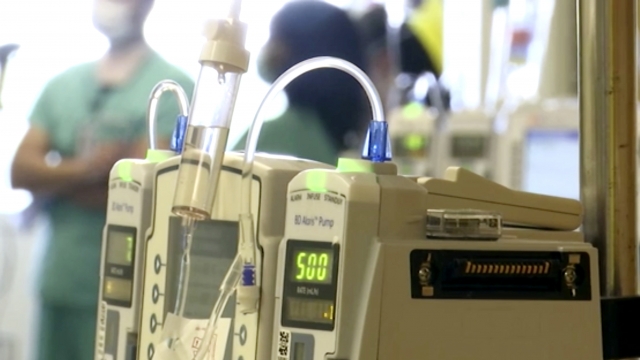 SMS
Doctors Are Seeing More Children Admitted To Hospitals
By Haley Bull
By Haley Bull
August 12, 2021
Florida is seeing the nation's highest rate for children being hospitalized for COVID-19, but Georgia and Louisiana are also battling the problem.
SHOW TRANSCRIPT

COVID-19 is landing more people in the hospital as the Delta variant continues spreading. But it's not just adults, as kids fill up beds too.

Pediatric patients make up about 15 percent of reported weekly COVID cases nationwide, according to the American Academy of Pediatrics.

She's on the pediatric frontlines of the pandemic in Florida, as a pediatric emergency medicine physician at Johns Hopkins All Children's Hospital in St. Petersburg.

"For physicians, nurses, techs. We're so exhausted. It's a huge volume of patients. It's also very disconcerting and just um frustrating to be going through this again I thick is how most people feel," said Dr. Rodriguez.

The hospital is busier than before, with kids who are healthy enough to go home and those who need to stay.

"You don't know which child is going to be negatively affected," said Dr. Rodriguez.

"It's likely that's a function of the fact that we're seeing more cases in general. It's still thankfully a less severe disease in the pediatric population," said Dr. Allison Messina, the hospitals chief of the division of infectious diseases.

Florida is seeing the nation's highest rate for children being hospitalized for COVID-19, but other southern states, like Georgia and Louisiana, are also battling the problem.

Like kids, adult hospitalizations also remain on the rise.

"The rise among adults nationally has been a little bit steeper than the rise in children. If you look at a state like Florida they’re almost identical. Both of them have had almost a 700 percent increase over the past 6 week time period," said Jason Salemi, Ph.D., an associate professor of epidemiology at the University of South Florida's College of Public Health.

Salemi notes the rates for new hospitalizations for kids is still lower than other age groups though. In other parts of the country with lower numbers, some doctors are keeping a close eye on national trends.

Zimmerman said their numbers are still low, though they're starting to see an uptick.

"The key point we need to think about is how can we mitigate this. What can we do as a community to help fight this off. And you know believe in science," he said.

Doctors emphasized the important of vaccines for kids eligible, and for those around kids not yet eligible, as well at prevention measures like wearing masks.