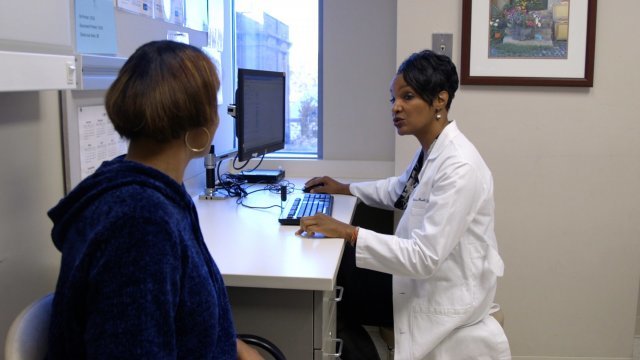 White coats and hospital walls don't protect physicians of color from racist patients. About 70% of Asian and black doctors deal with biased comments.

It's an open secret. Credentials don't protect physicians of color from experiencing racism, and there isn't an official national policy to help doctors deal with patient prejudice. Kimani Paul-Emile, co-authored an article in the New England Journal of Medicine titled, "Dealing with Racist Patients."

"When I first heard of these stories I was shocked. ... You'd be hard pressed to find a physician — particularly a physician of color — who hasn't had this experience or knows someone who has," Paul-Emile said.

"You can't go to a restaurant and say I don't want to be served by any Latino waiters. That would violate Title II of the Civil Rights Act. I thought it was odd that here we have in a medical context this happening all the time," Paul-Emile said.

The deal is valued at roughly $69 billion. And it's being called the biggest merger of the year.

It's called informed consent when patients learn of their condition and give consent to a doctor for treatment. Patients have the right to refuse care by a physician, but what if a patient refuses care due to bigotry?

"I would like to think. …  that my ability to provide excellent care to patients has not been significantly hampered by the social identities that are part of who I am. It has been one of my greatest joys of my life being a physician," Dr. Monica Peek, an internist at the University of Chicago, said.

Peek was the attending physician for a patient with a serious condition. The patient refused care from Peek and her team and issued a written request for a "white" physician.

"In this day and age for someone who is so sick, and we are doing the very best we could to take care of this person who was really in a life or death situation (ultimately [he] was transferred to the ICU) — that the primary thing on his mind was not his health and the well-being of himself and his family, but his racial prejudices towards persons of color who are caring for him," Peek said.

The patient was transferred to the intensive care unit (ICU), not because of his complaint but because of the severity of his illness. Still, patient expressions of racial preferences according to the New England Journal of Medicine are "painful and degrading" and can "contribute to moral distress and burnout" for minority health care workers

Having A Canine Companion Could Help You Live A Longer, Healthier Life

A new study published Friday found dog owners generally had a lower risk of cardiovascular disease and death, compared to those who didn't own a dog.

The article, co-authored by Paul-Emile, aims to help physicians deal with discriminatory patients. Its flow chart offers options for moving forward with care. For example, if a patient request is bigoted, the chart suggests options to accommodate, transfer, negotiate or limit unacceptable conduct from that patient.

Paul-Emile admits that a request to be reassigned to another physician isn't always discriminatory or racist. "It might look like bigotry, but it could be something else. For example, it could be that the patient is a war veteran and the physician reminds them of a former enemy combatant. In situations like this, it could be bias, but it could also be PTSD."

Aside from the impact of racism on health care professionals, Peek said: "The bigger, more important issue is what happens when patients are the target of racism. Structural racism. Interpersonal racism. Because they are the ones who are sick and vulnerable entering the system and really need help. ...  the problem is not going to be solved unless we all roll up our sleeves and get to work. So that's every person. That's every white person. That's every straight person. Every person."