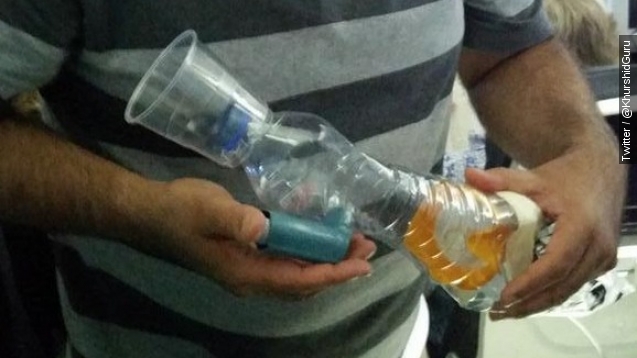 Who ya gonna call? Well, this time it wasn't the Ghostbusters or MacGyver, but someone much more real-life who stepped in to save a young child.

A New York doctor was on a flight back home from Spain when crew members announced mid-flight they needed a physician.

A 2-year-old boy with asthma didn't have his medicine because his parents accidentally packed it in their checked bags. Dr. Khurshid Guru got to work.

He turned an adult inhaler into a pediatric nebulizer using a cup, water bottle, some tape and an oxygen mask and tank.

"If we did not intervene at the time that I intervened, this would have been a much more dangerous situation. ... After two treatments, the child felt better," Guru told ABC.

Guru is the director of robotic surgery at the Roswell Park Cancer Institute.

He mentioned on Twitter he was relieved the child did well.

"It's a personal wake up call for families to make sure you carry these small things," Guru told WGRZ.

We're sure mom and dad will remember next time, doctor, but we're glad you were there this time around.

This video includes images from Twitter / @KhurshidGuru and music from Kevin MacLeod / CC BY 3.0.