How The Laurel-Yanny Clip — Like 'The Dress' — Tricks Our Brains 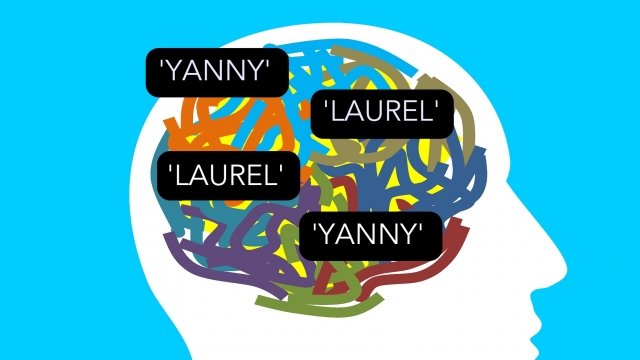 Like "the dress" in 2015, there's an audio clip making the rounds on the internet that's causing people to question their reality. Do you hear "Laurel" or "Yanny"? And more importantly, can you imagine anyone else hearing it differently?

"I hear Laurel through and through, unless somebody does something to the sound."

That's Dana Boebinger, a PhD student at Harvard studying auditory cognitive neuroscience. Boebinger wrote one of the first posts on social media tackling the science of the Laurel-Yanny clip.

Boebinger says the clip has lots of different frequencies, and you can change whether someone hears "Laurel" or "Yanny" by filtering high or low sounds out. That means you might have heard different words depending on the speakers you used. But there's more to it.

"That doesn't explain why someone's perception might change, or why people who are hearing the same thing in the same room on the same device might hear it differently. ... I think — and I'm biased as a neuroscientist — that a lot of it is in the brain," Boebinger said.

"I think people want to believe that they have direct access to what's out there and we don't," said Rosa Lafer-Sousa, a cognitive science grad student at MIT who studies color perception. She's researched the famous dress — the one that divided opinion on whether it was black and blue or white and gold. She even has one in her office.

"It really shook the color field. ... Any time we have a phenomenon like this, it's a really rich opportunity for research into the principles of perception," Lafer-Sousa said.

Both the dress and the audio clip are examples of ambiguous stimuli. That means they aren't clear on their own and are missing context our brains could otherwise use.

"If it were a sentence, like 'She sits on her' and then the sound, it would be 'laurels,'" Boebinger said.

And they both illustrate something neuroscientists know well but the rest of us would rather not think about: that our senses aren't faithful representations of the real world.

"At the end of the day, everything that we see and hear and taste and touch is to some extent a hallucination. It's based on our brain's best guess about what's out there in the world," Lafer-Sousa said.

And that's never more obvious than with ambiguous stimuli where different peoples' brains fill in the gaps differently.

"So you have this sound out there. It has a different pattern of frequencies over time, and the brain has to look at the high-energy regions and the low-energy regions and then kind of decide which ones are important for determining what a sound is. ... So I think this is just a good example of really ambiguous sound that the brain can interpret a couple different ways," Boebinger said.

Boebinger isn't planning to use the audio clip in her research, but says she wouldn't be surprised if other researchers do. The dress has already made a big impact in Lafer-Sousa's field.

"The dress got like 20 papers I think in the first two years," Lafer-Sousa said.