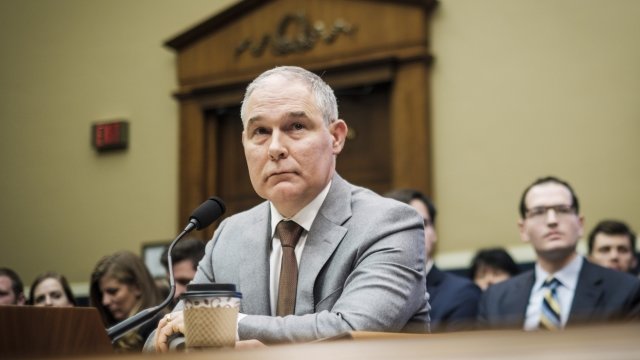 EPA chief Scott Pruitt has a new proposal that could change how the agency conducts a lot of its research.

"Secret science" is a term Pruitt and some members of the GOP use to describe research that helps inform government policies but is never released to the public. Rep. Lamar Smith, for example, and newly minted NASA Administrator Jim Bridenstine have been pushing for years to keep the EPA from using this confidential data.

Proposed EPA Rule Would Ban Certain Research From Use In Policymaking

EPA head Scott Pruitt said such a rule would increase the agency's transparency, but critics say it could ban valuable data from consideration.

Pruitt said this would increase transparency by showing how policy-informing research is actually done. But Democrats and scientists worry the change is just for political leverage. They say it could limit the information available to the EPA, which would prevent the agency from making informed decisions, and that the change might directly affect the health and well-being of Americans.

What's more, the whole proposal process appears to be taking place in the dark. For example, the meeting itself was revealed to the public only about a half hour before the event in a tweet. Climate change doubters attended, and reporters had limited access.

This seems to be a trend for Pruitt's EPA. In January, the Society of Environmental Journalists asked the agency why it was selective about who could cover its events or receive its press releases. As of late April, the agency still hadn't responded.