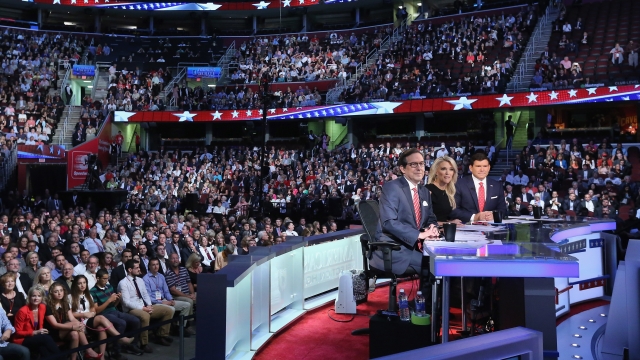 SMS
DNC Won't Allow Fox News To Host A 2020 Primary Debate
By Katherine Biek
By Katherine Biek
March 7, 2019
Democratic National Committee Chairman Tom Perez said he felt Fox News "is not in a position to host a fair and neutral debate for our candidates."
SHOW TRANSCRIPT

The first of the 2020 presidential primary debates is just months away. And if you're planning to tune in to watch Democratic candidates go head-to-head, don't set the channel to Fox News.

The Democratic National Committee announced Wednesday that it's not going to allow the network to broadcast any of its 2020 primary debates.

In a statement, DNC Chairman Tom Perez said he'd concluded that Fox News "is not in a position to host a fair and neutral debate for our candidates."

Perez cited a recent New Yorker article that painted the network as a propaganda machine for the White House. Among other things, it pointed out that a number of former Fox News employees now work for the Trump administration — including Bill Shine as the White House communications director.

A current Fox News executive told The Washington Post that he hopes the DNC will reconsider its decision.

And President Donald Trump responded on Twitter by suggesting he might similarly exclude news networks he dislikes from holding debates during the general election phase.

While Fox News did host a forum with Hillary Clinton and Bernie Sanders back in 2016, the network hasn't hosted one of the Democratic party's primary debates since 2004.

The DNC has already awarded TV rights to the first two of its 12 planned primary debates. NBC News and its sister networks MSNBC and Telemundo will host the first one in June. One month later, CNN will host the second debate.