Djokovic Stays No. 1, Beats Federer For The US Open Title 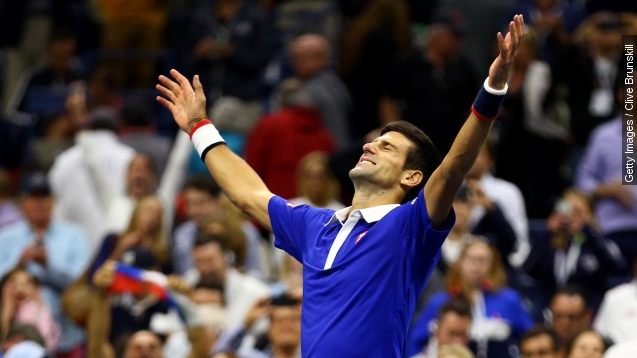 Novak Djokovic beat Roger Federer to claim his second U.S. Open title and prove why he's the No. 1-ranked male tennis player in the world.

Novak Djokovic is the number one tennis player in the world by a big margin, and in Sunday’s U.S. Open final, he showed us why.

The Serbian star knocked off second-ranked Roger Federer in 4 sets, claiming his third major title of the year.

Djokovic dropped the second set after a late break from his Swiss opponent, but took advantage of break opportunities to win the final two sets, 6-4 6-4.

The win marks the second time Djokovic took home the title in New York, a feat that has proved elusive. He had lost in four U.S. Open finals coming into this year’s event, with his only win coming in 2011.

It also makes 2015 one of the best years of Djokovic’s career. He won three of four major titles and was runner-up in the other, a feat he’s never accomplished before. (Video via Jacob's Creek)

For Federer, it was the latest in a string of tough losses against Djokovic. It was his eighth straight loss to Nole, all but one of which came in a final. Fed still hasn’t won a Grand Slam title since 2012. (Video via Fox Sports)

It was a dream final for fans. Federer and Djokovic entered the tournament as the top two seeds, and their previous meetings in majors had been loaded with drama.

But fans had to wait a while before they could see it. The match was originally scheduled to start at 4 p.m. Eastern Time, but rain pushed the start back over three hours, putting the final under the lights.

Djokovic is now poised to end the year ranked No. 1 for the fourth time in his career. (Video via Head Tennis)