Djokovic Sails Past Nadal In Sea Change At French Open 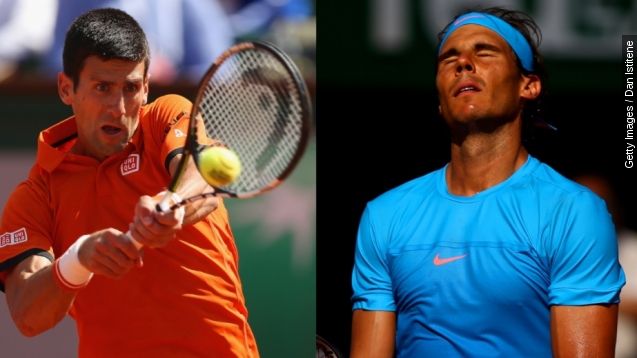 There was already something inherently strange about watching Novak Djokovic collide with Rafael Nadal at the French Open ... on a Wednesday ... in the quarterfinals.

Djokovic cruised past the king of clay in straight sets, handing Nadal just his second loss in 72 matches at Roland Garros, snapping a 39-match win streak at the tournament.

Two of the last three years this showdown was reserved for the title match on Sunday. Nadal won both times, and he's won the French Open an astounding nine of the last ten years. Oh, that's also the most French Open singles titles in history.

But tennis fans kind of felt this coming. Nadal lost his spot as the ATP No. 1 ranked player in the world last summer after a shocking upset in Wimbleton to Nick Kyrgios, at the time a virtual unknown Australian teenager.

Nadal has battled a series of injuries and slowly slipped down the ATP rankings over the past year. After his loss to Djokovic, analysts predict he'll land in the No. 10 spot, which would be his worst ranking in over a decade.

It's got the sports media posing hypotheticals that this could be a sign of Nadal's downfall. A Yahoo sports writer called Djokovic's dominate victory "the end of an era or the beginning of a new one."

"And we could be witnessing the end of an era. Rafael Nadal loses for only the 2nd time in his career at the French Open," a Fox Sports anchor said.

"I think Nadal is done, Mike. ... Because this was the tournament he held most tightly and Djokovic had made inroads everywhere else. And I just think that the way he has played over the course of his career, Mike, with such physical exertion, I think he's going to drop precipitously," ESPN's Tony Kornheiser said.

Meanwhile, Djokovic, the world's current No. 1 player, is on a pretty ferocious tear. He's won 27 consecutive matches and is eyeing down one of the most coveted prizes in tennis: the Career Grand Slam — a win at all four major championships at any point in a career. (Video via Jacobs Creek Wine)

Only seven men have accomplished that feat — Nadal and Roger Federer being the only active players.

Djokovic joins them if he hoists the elusive French Open Musketeers trophy this Sunday. (Video via HEAD)

Djokovic's quest for history next goes through No. 3 ranked Andy Murray. If he wins that match, he'll face the winner of Stan Wawrinka and Jo-Wilfried Tsonga in the finals. No matter what, a first-time French Open champion will be crowned and Nadal won't be in the finals. Sounds weird just saying that.